I had a moment of panic about halfway through because I had no idea what was going on with the theme even after getting to the revealer entries. Then I filled in the bottom third of the puzzle and the light dawned.

The clue to each themer sounds a bit outraged, and the answer is missing something that has “settled down” to the bottom of the puzzle. 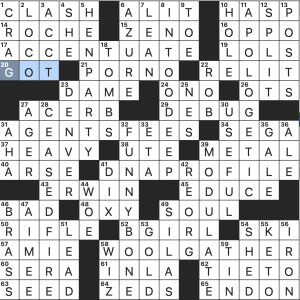 You’ve probably noticed that all the “sinkers” have something in common. The revealer confirms your suspicions. 37a [With 39-Across, genre for Warlock and Black Sabbath…or a hint to what’s sinking from five of this puzzle’s answers] is HEAVY METAL. Original and well-executed. I approve.

What I didn’t know before I did this puzzle: never heard of Cheryl Lynn or “GOT to be Real.” 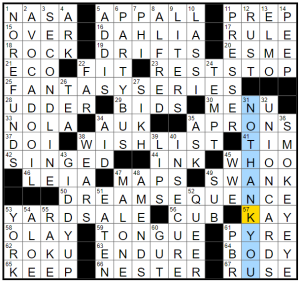 The most salient thing to note in this 16×15 puzzle is the clues. To wit:

Fave fill aside from the ones above: DAHLIA, DREAM SEQUENCE, YARD SALE, ROKU (did you know there’s a Roku Channel where you can watch Weird: The Al Yankovic Story for free, without having a Roku device?), NO REFUNDS, New Orleans SECOND LINE, GIDDY-UP, UNION CARDS, and the Issa Rae show INSECURE. I would like SMOKEY EYE if it were spelled SMOKY.

Theme: SILENT PARTNER (57a, [Investor with a limited role … or the unpronounced letters in the first words of the starred clues’ answers, collectively?]). The silent letters in the main theme answers collectively spell out the word MATE, a synonym for “partner.” 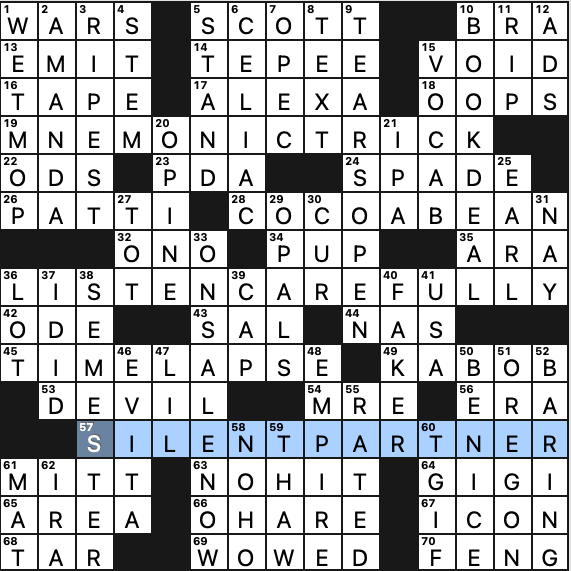 The wording on the revealer got a little…wordy, so it took me a couple of extra beats to get the gist of it. But once I did, I was on board, and I liked the theme just fine.

It’s tough to have a 13-letter revealer and have to place it in the 12th row. And it’s even tougher to have five theme answers in that situation. That compresses all the theme entries into the middle of the grid with only one row separating each of them. As a consequence, there are more fill answers than usual that cross two theme answers and way more than usual (I count four) that cross three theme answers.

But look at those four: TEARS OPEN, BOOK DEAL, ON SALE NOW, and SEMESTER. Oh, and there’s OPALS down the middle. That’s a really impressive set considering the constraints of having three fixed letters in each of those entries. In fact I barely noticed any gunky fill during the solve, so I’m super impressed at how this grid could’ve been filled so smoothly (weirdly-spelled KABOB, notwithstanding). Nicely done!

3.75 stars from me. A solid theme, but really impressive fill, given the constraints. 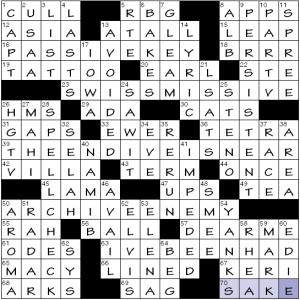 Okay, I’m inexplicably wiped out this morning, so just a quick spin through the rest of the grid:

That’s all I’ve got today. Overall impression of the crossword is that it feels perfunctory. 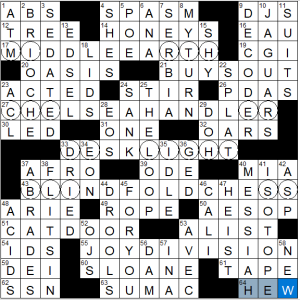 Our themers are bracketed with the letters of words that are synonyms for “happy,” with the revealer JOY DIVISION [55a “Love Will Tear Us Apart” band … and a hint to each set of circled letters in this puzzle].

A few clues caught me out a bit more than I expect from these Friday puzzles, but not more than I expect from Ross: [Lines of credit?] is ODES rather than IOUS, [Means of returning home after a hunting trip, perhaps] took me a second even after I stopped reading “hunting” as “haunted” — CATDOOR suggests an outdoor cat; I do not let mine out. [Made, as a jumper] had me stuck on KNIT for a good while, but it’s a basketball jumper rather than a British jumper, which is SANK.

Hope you’re having a restful holiday. My thanks to all veterans reading today.

Theme: The leftmost word in each theme answer can be put in front of the word SHARK. 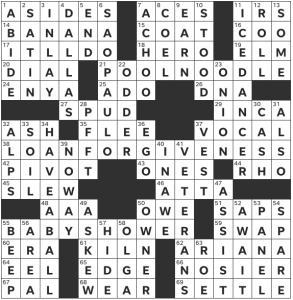 I was so excited about this theme that I initially filled in BABY SHARK instead of BABY SHOWER. “BABY SHARK” is such an earworm, and I’m not even mad about it. I also loved the spanner in LOAN FORGIVENESS (and also I love LOAN FORGIVENESS as a concept). When I first saw this title, I didn’t really know what to expect, but I was really pleased when I figured it out after filling in the second themer. “Left Shark” is, of course, a reference to the shark that performed left of Katy Perry at the Super Bowl halftime show in 2015.

The fill on this was really smooth as well. The crossing -IDE in 1a [“Remarks meant for the audience”] ASIDES and 1d [“Put up with”] ABIDE was challenging at first since ASIDES didn’t come right to mind. 8d [“‘Black Panther: Wakanda Forever’ actress Michaela] COEL was certainly timely, given that the film came out today. Similarly, 41d [“Seasoned pros”] VETERANS was also very timely since it’s VETERANS DAY as well.