Thanks a ton to Sophia, who covered for my last weekend while my husband and I were out of town on vacation! We took our first trip to Hawaii and enjoyed ourselves tremendously in Maui. Now that we’re back, I’m excited to dive back into a new Sunday NYT puzzle. It was a fun puzzle, though one that was spoiled super early at 20A: IT’LL BE FUN! :) 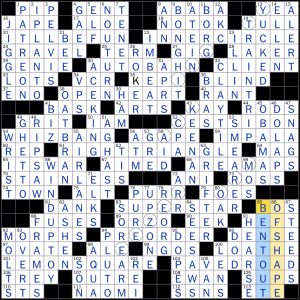 – 61A: RIGHT TRACK (RIGHT TRIANGLE) [What you’re on when you’re making progress]

– 83A: SUPER STORM (SUPER STAR) [Major concern for a meteorologist]

Wow! The more I delve into this theme and its execution, I really like it. At first, you notice how the “true” answer to each theme clue veers off at an angle into the circled squares, which seems to fulfill the revealer enough … but what are the themers veering away from? Shapes! INNER CITY veers off from the CIRCLE of INNER CIRCLE, OPEN HEARING veers off from the HEART of OPEN HEART, etc. So, truly, each of the themers is literally BENT OUT OF (a) SHAPE. Solid work! The only real trouble I had in solving the grid itself was the SW corner – for whatever reason, I had a devil of a time getting any footholds there.

Other random thoughts:
– 16A / 16D: I wonder how many people will get stuck here with WAPE / WIGGLE instead of JAPE / JIGGLE, seeing how WAPE and JAPE seem like equally nonsensical entries? Check here for errors!
– 81A DANK: I’m guessing this’ll be new to some folks, so here’s a quick primer.
– There were a number of debut entries that felt quite fresh and modern, which I enjoyed, including PATREON (where the constructor works!), BONG HIT, UPZONE, and YUCKED (someone’s yum).

That’s all for now – I hope you enjoyed this puzzle as much as I did. Let us know what you thought by leaving a comment below. Otherwise, be well and have a great start to December!

PS: Today’s constructor, Adam Wagner, also co-invented a fun new daily anagram game called Anigrams – if you haven’t checked it out yet, you should!

Evan Birnholz’ Washington Post crossword, “The Long and the Short of It” —Matthew’s write-up 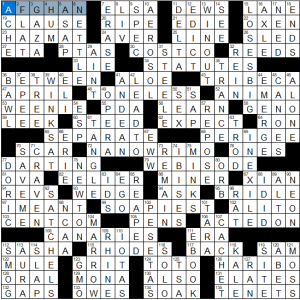 Another meta from Evan this week, a happy outlet for peace and quiet after my holiday houseguests left early this morning.

Our title is “The Long and the Short of It,” and we’re prompted for “a five-letter American company.”

An oddly-worded clue early on caught my eye: [11d Triangle after gamma] DELTA. Delta, of course, is a five-letter American company, but I doubt it would be that easy to skip the process. Working further through the grid, we have five marked clues:

Each of these entries are notable abbreviations: HAZardous MATerials, TRIangle BElow CAnal, NAtional NOvel WRIting MOnth, CENTral COMmand, and HAns RIegel BOnn. And so that “triangle” clue suddenly is more sensible, as is the (frankly preposterous) clue for SAM at 119a: [Riegel who provided the voice of Donatello on “Teenage Mutant Ninja Turtles”].

This is a good deal easier to summarize than to piece together, but each word abbreviated in the marked entries also appears in the clues. Following the first letters of those entries, from the F in FLAT [2d Below the correct pitch] to the S in SAM, spells out FEDERAL EXPRESS, which naturally shortens each of its component words to the five-letter FEDEX, our meta answer.

A fun romp through the grid with clear breadcrumps from step to step — the clues for DELTA and SAM were big red flags helping me out. 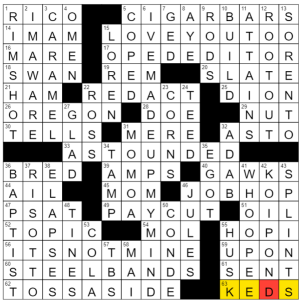 I don’t get IMAM [Prayer leader on the minibar]. Can anyone help?

I would like to have seen a few more ? clues and a little more playfulness, but this is a solid grid and well-clued.

You can’t help yelling, “Stella!”—at least in your head—whenever you see her byline, right? Especially when a puzzle is this good.

She brings us a simple yet perfectly elegant theme which adds a PS to familiar phrases—at their ends, of course. 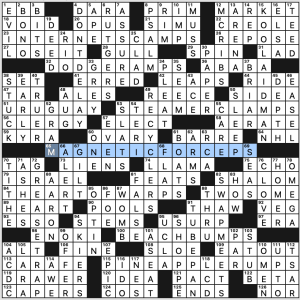 The theme was just the start of it. This puzzle is quite clean and smooth for a 21x and there’s plenty of fill to enjoy along the way. Case in point: “DON’T DELAY,” KOOL-AID MAN, URUGUAY, GREASE TRAP, SWAP MEETS, RUTGERS, LOSE IT, and TWOSOME. Plus a cool ISRAEL/SHALOM pairing.

I confess to never having heard of a TUBE PAN [Bakeware item for angel food cake], even though I used one on Thanksgiving to make some monkey bread. I always thought it just a smooth Bundt pan. And now I just learned Bundt comes from the German Bund which means turban, and according to the OED, should be capitalized.

There is one crossing that might cause solvers trouble: 21a SIMU [Actor Liu who played Shang-Chi] and 11d MUSS [Tousle]. Even though I was pretty sure SIMU was correct (having seen the film in question and having seen his name in crosswords), I did consider whether MESS might’ve been right for 11d. If a solver didn’t know the name, they might’ve gone that direction. 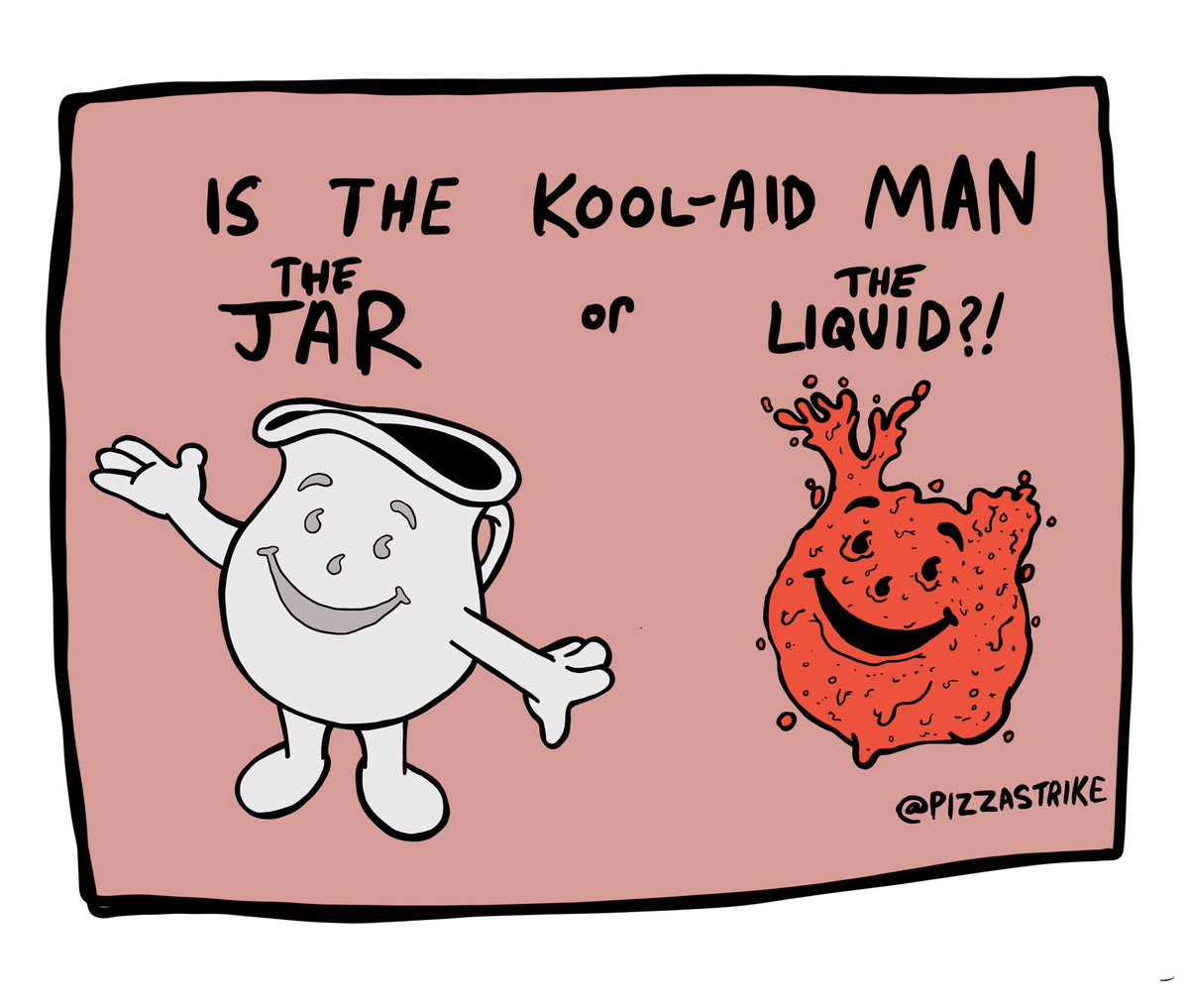 Wonderful puzzle with lovely fill all around. 4.25 stars.

Theme: A play on the Y sound in the puzzle’s title, each theme answer is a female author whose first and last names end in Y. 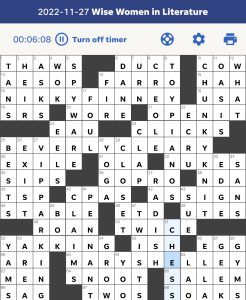 Late post here since I had a long drive home yesterday. This was a fun theme, and I appreciated that it used the Y sound so well to highlight these women. I knew both BEVERLY CLEARY and MARY SHELLEY. I wasn’t familiar with NIKKY FINNEY and initially filled in NIKKI out of habit before 5d [“Privacy-violating computer programs”] SPYWARE corrected me.

Aside from the themers, I really liked 10d [“Cozy sweater style”] CHUNKY KNIT, which is seasonally appropriate. 9d [“Instruments for kids”] TOY PIANOS and 52a [“Talking endlessly”] YAKKING were also really fun.