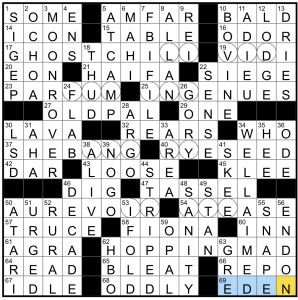 This is a cute theme! I figured out vaguely what was going on pretty quickly with the split angry words, but the revealer still surprised me when I reached it. I like the mad words Chloe chose, that they’re all about the same length, and that the split happens in the middle of each of them. The consistency helps tie the puzzle together and feels quite elegant.

One problem that can arise when the theme of the puzzle is not strictly tied to its longest answers is that the longest answers can instead feel boring and solely in service to the theme as opposed to being sparkly themselves. Some of the half-theme answers today are true standouts, like GHOST CHILI, AU REVOIR, and the whole SHEBANG. Others, like VIDI or PARFUM, don’t really add much.

I liked a lot of the fill in this puzzle – MOON ROVER and OLD PAL are my favorite entries, but the entire big NE and SW corners are very well filled with almost no dreck. However, I think the top left of the puzzle could be tricky for some solvers. SIG EP, OCHOA, AMFAR, and HAIFA all have the potential to be unknowable, and if you’re like me and misspelled both ALLAN and INGENUES with E’s, it’s not going to help. FBI FILE is a fun answer too, but it’s hard to parse from only a few letters. I personally had to come back to the top left after finishing the rest of the puzzle in order fix up my errors.

Overall, though, this puzzle did the opposite of making me hopping mad! Congrats to Chloe on a great NYT debut.

Theme: QUIDDITCH (58a, [Wizarding sport whose positions are the ends of the starred answers]). The other theme answers are familiar phrases whose final words are also QUIDDITCH positions. If you have no time for Harry Potter in your life, you might just want to skip on past this one.

There are seven players on a QUIDDITCH team: 3 Chasers, 2 Beaters, 1 Keeper, and 1 Seeker. I tried to list the positions’ jobs from memory below, but I failed and resorted to looking them up. 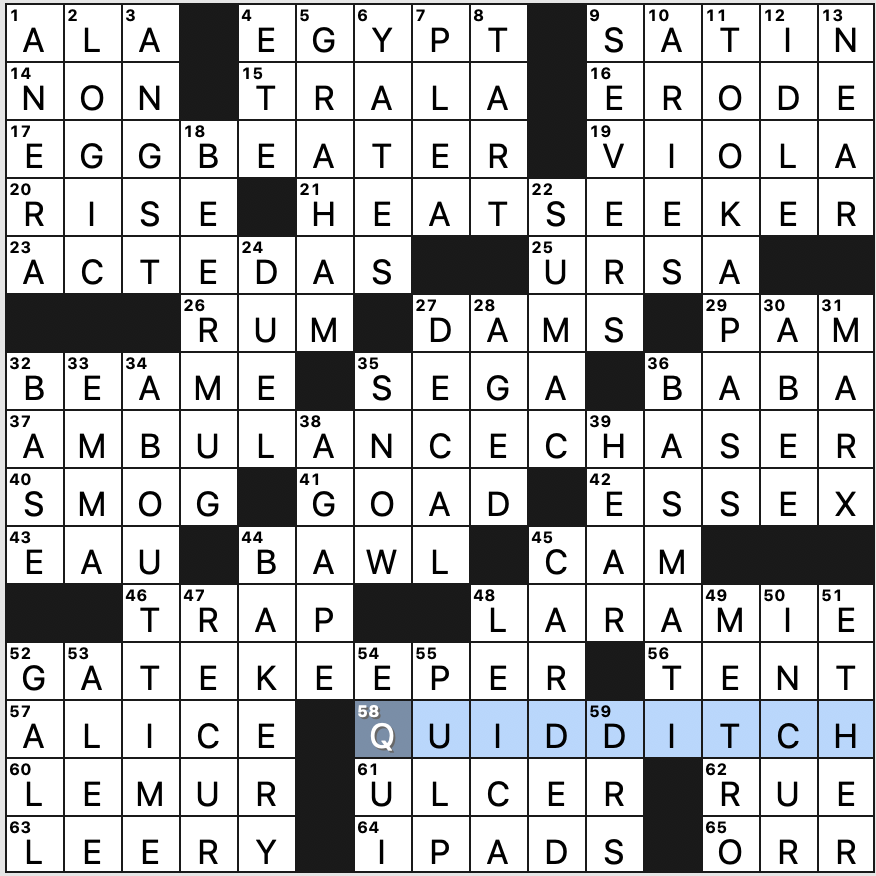 I had to chuckle when I got to the third entry on this list and figured out what was going on. I loved the perfectly apt title as well. Fun theme and theme entries for those of us who have enjoyed the HP books/films at one point or another.

TOOK A PASS, “ABOUT TIME,” BEER MUG, LARAMIE, Wyoming, and BASMATI rice top the fill. Nothing to balk at either although there are a couple of partials (AN ERA and A BEE) and some tough-for-Monday clues.

Fun puzzle if you don’t mind it being Harry Potter-based. Otherwise, you’ll probably want to downvote it to oblivion. 3.75 stars from me. 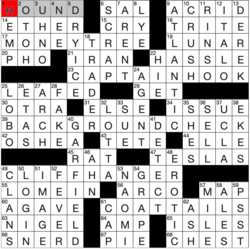 Little time today, so I’ll just explain the theme on this one. The revealer at 61A [Features of some formal jackets, and what the ends of the answers to the starred clues literally are] is COATTAILS. Each starred clue leads to a word that can follow, or be the “tail” of, the word COAT.

It’s not often I’m already thinking about these writeups while solving, but today’s from BEQ had me there – I think it will be one of the more memorable puzzles I solve this month. 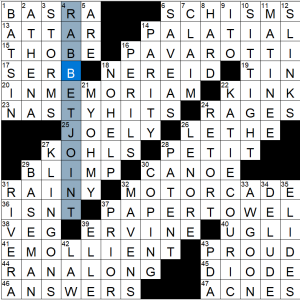 The appealing staircase design had me completing the grid a bit anticlockwise, through some truly enjoyable entries: MY OH MY, Diego RIVERA, EMOLLIENTS (I just like saying this word) and clues — [It’s on a roll] for PAPER TOWEL, [River in a forgettable trip?] for LETHE, and [Aliens who speak with trilled R’s and choked G’s] (presumably Klingon phonetics can be represented in IPA, but BEQ eschews that here) for KLINGONS. In general, the difficulty was spot-on to get out of a post-holiday lull; entries took some thought but it’s a steady difficulty.

Two minor exceptions to that smoothness in the NW and SE corners. I found the cluing and fill in the SE a bit of a distraction. I’ve never seen plural ACNES [High school students’ marks?] and am not sure what [Tangerine element] is going for for UGLI — I understand the UGLI to be a blend of grapefruit or pomelo with mandarin orange or tangerine, not the other way around. [Loses characters, say] for ELIDES slowed me down, because I understand elision to be in speech, where characters aren’t really in play. Perhaps “elision” is also used to refer to poetic shortening in text, but I’m not as familiar with it there.

By contrast, new-to-me RABBET JOINT [Connected groove in woodworking] crossing ATTAR (with a more difficult clue than the more common connection to “rose petals” and “oil,” new-to-me THOBE [Ankle-length long-sleeved garment worn by Arab men], and known-to-me-but-perhaps-tough connection from “Cevapi” to SERB was where I finished, after an enjoyable few seconds deciding on a semi-confident guess for “RABBET.” I recognize the joint from a childhood watching the New Yankee Workshop and This Old House, but not the term. 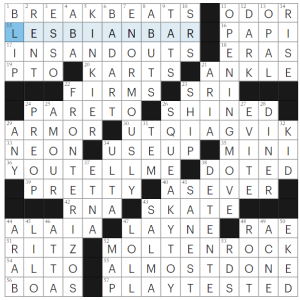 Super-tough crossword for me, with quite a few entirely unfamiliar terms and names: BREAK BEATS, ghungroo on your ANKLE, Indonesian rice deity Dewi SRI, Italian economist Vilfredo PARETO, 5,000-person town UTQIAGVIK, Spanish word FRONTERIZO with zero cue that the word’s not English, ROOT clued as [Note that defines a chord], and OPAL being a [Player on the Australian women’s national basketball team] (Australia being a major source of opals, I guess it’s not surprising the team would be called Opals, but the clue didn’t pin down whether we were looking for an individual player’s name or the team name).

Re: the LESBIAN BAR clue, [Type of establishment of which fewer than twenty-five remain in the U.S.], here’s a Chicago Tribune article on the evolution of lesbian bars into more broadly inclusive establishments, such as Nobody’s Darling, a women-centered bar in Andersonville that welcomes trans women, queer folks and POC, and gay men, along with lesbians. The article notes that nowadays women can find dates in a zillion places besides lesbian bars. There sure are still a lot of gay bars drawing a mostly male clientele, though, so I’m not sure the writer’s conclusions really explain things. Anyway, I was astonished by the teeny number in the clue!

Fave fill: LESBIAN BAR, INS AND OUTS, YOU TELL ME, PLAY-TESTED (my day job is crossword editor for a mobile gaming company, so play-testing is a familiar entity, and I like the [Was a game-changer?] clue).

Does this work in chess terminology, [A castle can never be one] to clue OPENING MOVE? Do you say that the piece moved is the move?