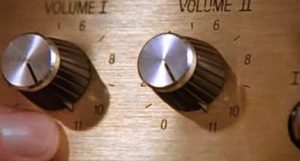 This writeup goes to eleven

This week we’re looking for a movie term. I liked Eric H’s comment last week: …the Fiend reviewer’s explanation of how they solved the meta always makes sense, but I often don’t how they made some crucial determination of what to look at to solve the meta.

I strive to write concisely and clearly when I describe a meta, but realize that I may be too concise at times. So I thought I’d stretch out a bit this week and describe my thought process as I solved this one. This meta followed a classic pattern often used by Mike. Step one: find the theme entries. Mike made it easy this week: the five long across entries were all movies:

Step two: find something to connect the themers. I didn’t see anything in the entries themselves. I looked for substrings (like YES in POLYESTER and PIN in THISISSPINALTAP), and that went nowhere.

Step three: when the entries yield no signal: check the clues. This is where I felt I had found the trail: every clue started with a year. You could clue those five movies a lot of ways, but starting each clue with a year was probably not a coincidence.

Step four: apply the years. Yuri Gagarin (mentioned in the clue for CCCP) was the first person to travel to outer space in 1961 (same year as THEHUSTLER), but that rabbit hole died quickly. Then I spotted 13d (YEAR, clued as “Four-digit number, usually”). Mike often hides an additional hint in the final horizontal entry; he used 13d this time but made it clear that it was thematic. There are a lot of ways to describe a year and mentioning “digits” stood out. This was Mike’s way of saying that YEAR was the right rabbit hole and also: treat the years as four digits. For example: THISISSPINALTAP was 1,9,8,4. 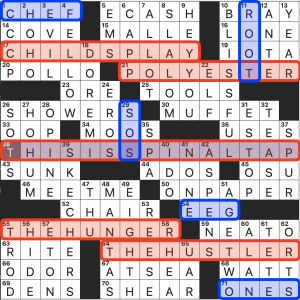 The rest of the theme entries followed the same pattern:

The mapped clues spell SCORE, our contest solution. Readers: let me know how you made out, and please let me know if this style of writeup was helpful for some of you. I’m happy to dive deeper now and again (time willing).