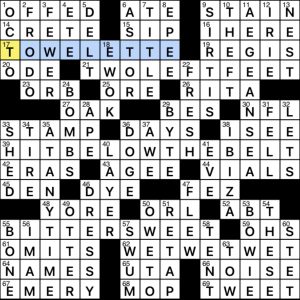 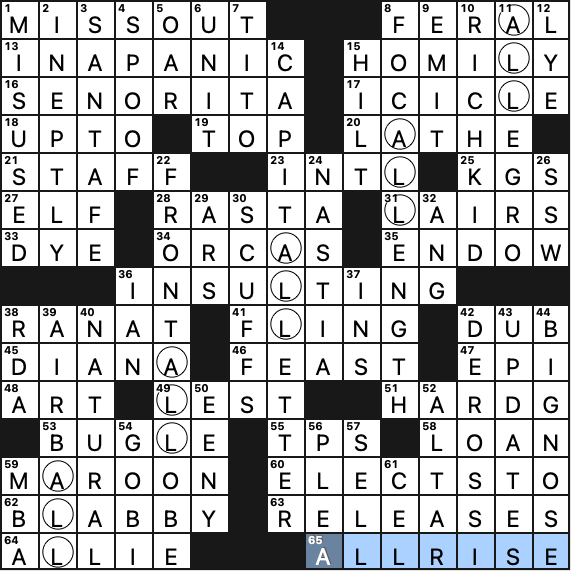 Solid theme, though I have to admit it didn’t do a lot for me. I think Mary Lou Guizzo and Jeff Chen ruined this type of theme for me with their near-perfect Descent of Man puzzle. What I loved most about that puzzle was that each theme answer was a grid-spanner, thus giving them no wiggle room in the placement of their entries. But this one does its job well, and the theme answers are solid.

But they must have been hard to work with since there’s a 13-letter entry going down the middle and a 9-letter entry going across the center. Plus the 7-letter revealer in the bottom right. The result is an unusually-shaped grid with four largish corners. You can see the difference in a corner with no theme material (the NW) which is the smoothest of them all. The rest aren’t bad, but we get some less-than-stellar fare in ELECTS TO and RAN AT.

On the plus side, I liked RICH KID, SANTA FE, MISS OUT, SEÑORITA, and de Bergerac’s BIG NOSE.

Clue of note: 47a. [Adrenaline, for short]. EPI. I admit to not knowing adrenaline and epinephrine are the same thing. But even so, do people say “EPI” other than when referring to an EpiPen?

The grid must have been a challenge to fill, but it’s solid all around. 3.5 stars. 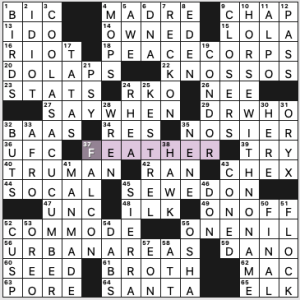 This theme is really for the birds. Literally!

51d. [Gathering of 1-Down, like that found in the center of this puzzle], FLOCK. Though technically, a flock wouldn’t be seven birds of different species hanging out together.

37a. [Element of plumage … and a feature shared by every answer crossing this one], FEATHER. The seven crossings are the FALCON, WREN, RHEA, KESTREL, HAWK, NENE, and CONDOR, all clued with bird facts.

Bonus thematic material includes PEACE CORPS clued via a dove, URBAN AREAS clued via pigeons, and not symmetrically, IDIOT clued as [Turkey] and a finch in the birdSEED clue. The 15-letter downs are not theme entries.

I’m moderately into birds, so I enjoyed the avian quizzing here.

Least favorite fill, again: DR. WHO. If you want to know why, see last Wednesday’s post and comments. 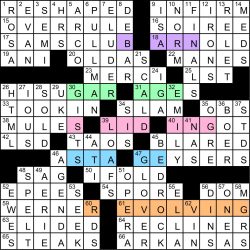 Hello there, everyone! I hope you’re doing well as we quickly speed into the final month of 2022!

We have a milestone puzzle, as this is the 600th puzzle of the Crossword Nation series! Man, if we made a cake for it, can we make one big enough to fit 600 candles?! Anyways, on to the puzzle. In many respects, our intrepid constructor has busted doors open in the crossword community, being a mentor and guiding light for many others who have followed her path into creating and solving crossword puzzles. So very fitting that we have different types of doors being referenced in the circled boxes that are separated by black squares.

Loved the intersection of SLAM (34A: [Poetry contest]) and EMILY, especially since the latter always makes me think of the time I won third place at a poetry-reading competition in eighth grade (32D: [Poet Dickinson]). The story about how I even decided to enter, and eventually read aloud one of Dickinson’s poems, is something I’ll never forget. Our religion/spelling teacher, Sister Alice, passed around different poetry books in our class in the hopes that a few of us would come across a poem they like and, if they so choose, volunteer to sign up for the poetry slam. When coming into possession of one of the books, I came across Dickinson’s “I’m Nobody. Who are you?” and started reading it aloud softly, but didn’t think anyone would notice because others in the class were talking out loud, too. Out of nowhere, as if she had supersonic hearing, Sister Alice spots me and asks if I’m reading “I’m Nobody…,” which she said was one of her favorite poems. I said yes, but was getting ready to move on to another poem before she asked me to read it out loud in the class. I never saw a sparking in a teacher’s eye glisten more than when she heard me reading that poem!! I mean, yikes! She pretty much goaded me into putting my name into the competition, and who was I to turn a nun down?! I mean, my 13-year-old self was worried about getting into heaven and thinking that saying no wouldn’t help my case for when my time comes!

So the day of the poetry slam is here, and Sister Alice, after coaching me up for says like Gene Hackman’s Norman Dale character from Hoosiers, is one of the judges. As my luck would have it, the person who performed before me absolutely…tore…the…house…down!! I forget if it was a Maya Angelou poem or not, but it definitely was a black empowerment-themed poem, and the young girl nailed every line, struck every emotional chord and, afterward, got a rousing round of applause in the school gymnasium. And deservedly so! Oh…I’m next, and by the time I walk onto the stage, the standing ovation hadn’t ended yet. I was toast. No one would even remember what in the world I said. But I performed it, and I emoted and gesticulated and did my very, very best! Then there’s a pair of us…DON’T TELL!! They’d BANISH US, you know!!

Afterward, there was a courtesy applause, as the audience was still buzzing from the person who came before me. I knew I didn’t win, and I knew that the person who preceded me would win hands down…which she did! Two days later, during a spelling class, Sister Alice came up to me and shared some news, which I was anticipating would be something akin to, “You tried your best, and that’s all that matters.” She told me that I came in third place in the judges’ tally, and got a small bronze medal that I received once it came to the school. I don’t know how much sway Sister Alice had with the judges, if any, but I can’t thank her enough for her encouragement!

“Sports will make you smarter” moment of the day: BEDROCK (45D: [“The Flintstones” town]) – One of the top relievers in baseball during the 1980s, former pitcher Steve Bedrosian, nicknamed “Bedrock,” amassed 184 career saves during his Major League career, from 1981 to 1995. In 1987, Bedrosian had his best season, recording 40 saves for the Philadelphia Phillies and becoming one of the few relief pitchers in history to win the Cy Young Award. 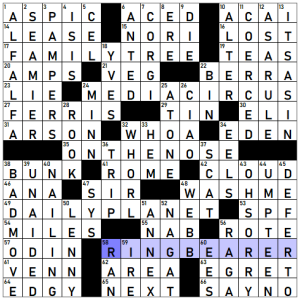 All trees have rings to indicate their age. All circuses have rings where acts are performed. Some noses have rings if they’re pierced. A planet has rings if its Saturn (ok, Jupiter, Uranus and Neptune also have rings but I know you didn’t think of them!). The general-to-specific progression of this theme set is interesting. All theme answers follow the “blank RING” convention, as in tree-ring, circus-ring, nose-ring, and planet-ring, so that’s a plus for consistency. I can’t help but wonder if there could have been a punchier clue for ON THE NOSE.

While the grid doesn’t have any extra long bonuses, I’m impressed by the clean triple stacks of 7’s in all four corners. Topping the bunch are ALFALFA, AS A RULE, ITS A SIN, BAD MOVE, OH SORRY, and UMPTEEN.

Clues: [Totally confused] is most certainly LOST. [Equipment for blasting rock?] is not dynamite – we are talking about rock music and the answer is AMPS (a sneaky plural if you ask me). [First lady’s garden?] is referring to the first lady in the Bible, Eve, and her garden of EDEN. [Take in or let out] is not referring to an adopted pet, but to a seamster’s task to ALTER a garment. I’m not convinced that ROTE works as an adverb to match the same part of speech hinted by “way to memorize” in the clue (“rotely” or “by rote” would work). [Memory used to store times tables] might have connected better with the noun form.

Comments: The word ASPIC does not sound pleasant, but it is, apparently, a savory meat-based jelly. Google Ngram Viewer tells me that “seedier” is a more common synonym for “more sordid,” but SEAMIER is apparently more common than “sleazier.”

Words-that-follow-half themes are pretty overdone, but it’s a classic theme type and this puzzle executes it well with a clean grid to boot. Nicely done, Catherine.

Editor:  Erik Agard
Theme: Each theme answer begins with FL and ends with AN, splitting the word FLAN. 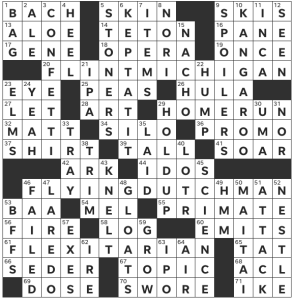 Cute theme, although I’m not sure exactly why flan is the only dessert on the menu…. It might have been cool to split different desserts for each theme answer, although that would make the theme harder to see, and I’m not sure how many short-named desserts there are. “Cake”, at least…. The theme answers themselves are nice. I did not know FLINT MICHIGAN called paper grocery bags “Hamady sacks”, but I do have a strong memory of getting a soda in a gas station in South Dakota once and the clerk asking me if I “wanted my pop in a sack”. I miss the midwest.

This puzzle played incredibly easy for me – I swear I didn’t read at least a third of the clues because I didn’t need them from getting the crosses. That’s pretty rare for me on the USA Today, as often times there is specific knowledge that requires me to go back through an area, but that didn’t really happen today.

Clues/answers that I knew that might stymie other folks: [“___ on Titan”] for ATTACK, [Uramaki seaweed] for NORI

Clues/answers that were new to me: [Daredevil aka ___ Murdock] for MATT, [Dance taught by Keali’i Reichel] for HULA, [Dong, in baseball] for HOME RUN – I’ve only heard “dinger”.

There’s a lot of theme material in this puzzle and it works overall. Each theme entry is a two-word phrase where each word starts with P. 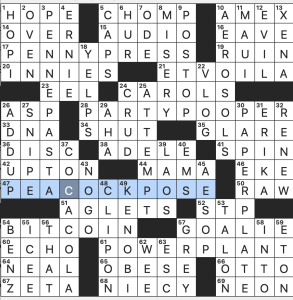 I like the way the theme answers interlock. They’re all in the language (although I rarely hear PENNE PASTA  – usually it’s just PENNE). It’s a perfectly fine Tuesday theme.

We had to wake up at 4:30 this morning to take our kid to the airport so I am TIRED. I’ll skip right to “what I didn’t know before I did this puzzle” and tell you that PEACOCK POSE is new to me. It sure does look challenging. 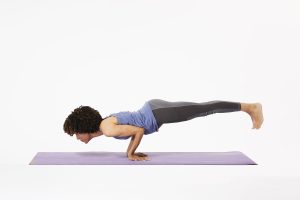 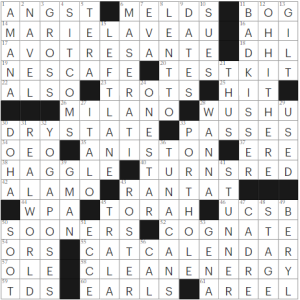 Today’s ‘moderately challenging’ crossword in the New Yorker felt like a bark-is-worse-than-its-bite puzzle. Sometimes a clue looked as if it might be tough, but it never seemed to be. Or at least they never presented that much of an obstacle.

The misdirection clues were clever in ways that let you appreciate them, without being overly tenuous or recondite: 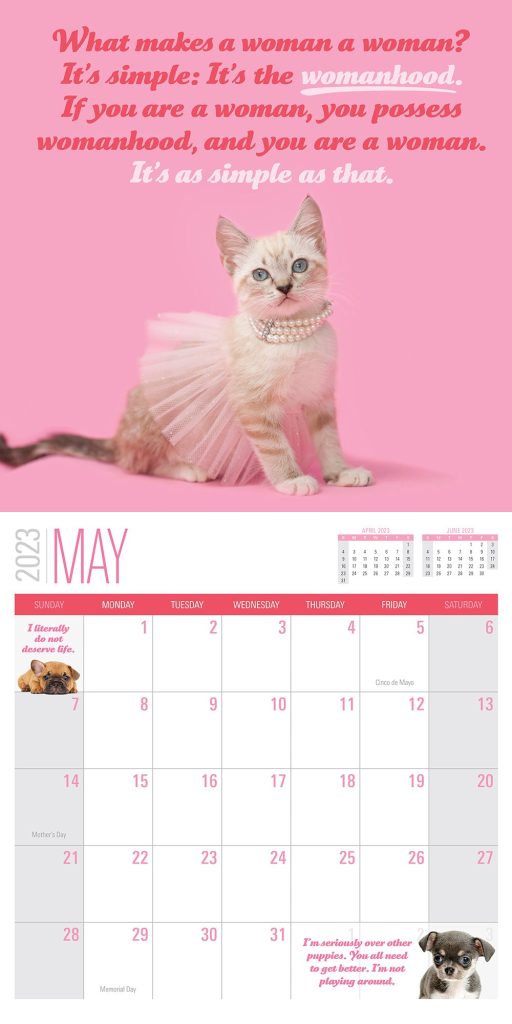