We’ve got a debut puzzle today, and from one of the members of the inaugural New York Times Diverse Crossword Constructor Fellowship! Let’s see what all the talk is about in today’s gossip-filled puzzle: 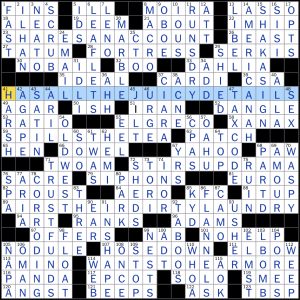 This felt like a classic puzzle – in-the-language phrases around a central topic – but with some nice modernizing touches (Netflix, smoothie bar, cooking show). SHARES AN ACCOUNT was probably my favorite reimagining, while I wanted a slightly stronger clue for AIRS THEIR DIRTY LAUNDRY (since I don’t think that’s what many athletes actually do?). A fun theme, though, and one where I don’t know that I can come up with many other examples.

Other random thoughts:
– Entries like MOIRA, NO BAIL, AMERICANAH, SPILL THE TEA, and L BOMB as well as the clues for entries like PANDA helped this puzzle feel current and fresh, which I enjoyed.
– CARDI crossing CIARA might have been hard for some solvers, but the entries were so in my wheelhouse that they plunked in easily!
– Aside from maybe SERKIS (for me at least), this grid felt super clean.
– My one grimace was OAHU being clued via its military occupation – there’s so much more to represent OAHU from a Hawaiian perspective that it was a bummer to have it clued this way.

All in all, an enjoyable solve – congrats, Gustie!  We’re looking forward to seeing many more puzzles from you.

Dear readers, make sure you send along your congrats in the comments section and remember that kindness goes a long way.  It is incredibly tough to make a clean, fun puzzle, much less a Sunday-sized one.  The quickest way to discourage newer constructors (especially ones from groups less represented in crossworld) is to harshly critique them from behind your computer screen, especially when you yourself have never made a Sunday puzzle, much less published one in the NYT.  Our beloved world of crosswords only survives from generation to generation if we support and encourage newer constructors, so remember to do your part.  Constructive feedback for new constructors is great!  Crapping on them or their work is garbage behavior.

Relatedly, it should be noted how relatively rare it is to have a stand alone Sunday NYT puzzle by one woman constructor. More please, NYT!

Theme: Each theme answer is a Down answer (the “fall” of the puzzle’s title) that includes GALE between two words. 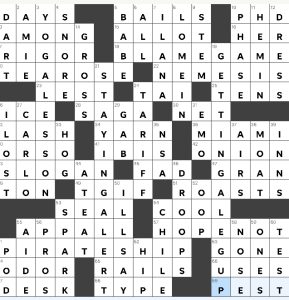 I really had to read into the puzzle’s title to figure out the theme of this puzzle. GALE is not always the first term that comes to mind when I think of wind, but it certainly works. In fact, I really liked GETTING A LEG UP, as it spans GALE across three words. STAYING ALERT filled quickly for me too, though I initially tried to put in YOGA CLASS for YOGA LESSON, but it was much too short.

Content-wise, there is a lot of great fill. Some items that stick out to me: 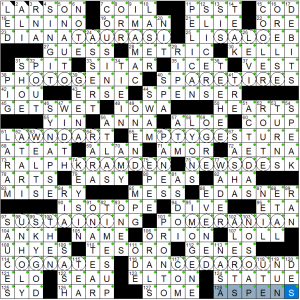 Good morning from an Amtrak ride, which has electricity thankfully – I’d been without at home since early last evening. A more straightforward theme after last week’s meta – we have twelve themers used over six rows, each containing a letter string that anagrams to a country:

I can imagine a world in which this theme idea stops at six or seven long entries, or eight with a few running down. But I quite like the approach of getting to twelve such that six of the 21 rows in the grid are composed only of theme entries. It both fills up the grid and allows for longer anagrammed countries. I also found the grid easy to move through — the middle is nicely open considering two theme rows so close to each other. In fact, 16 entries in 21 columns cross two themers in the middle. That’s not easy, and it makes a better experience for the solver.

Edit: Thanks to commenter Sheik Yerbouti for pointing out that the first letters of the countries spell out ALTERED STATE. Just a lovely bit of icing on the cake, which I should expect by now from Evan, if I’m being honest.

Theme answers are familiar two-word phrases where the first word indicates that the second word is an anagram of the clue word. 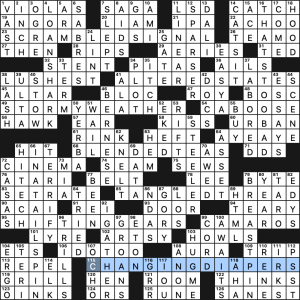 Enjoyable theme. I’m not sold on some of the indicators (such as “stormy” and “blended”), especially for someone who doesn’t do many cryptic crosswords, but once you get the gist of the theme, it’s easy to work everything out.

Top fill: LOAN SHARK, “THAT’S TOO BAD,” “I GATHER,” IN A TAILSPIN, CABOOSE, “I DO TOO.” The rest of the grid is smooth with almost nothing to scowl about.

Solid puzzle all around. 3.5 stars. 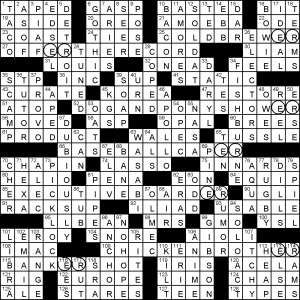 Jill Rafaloff & Michelle Sontarp’s puzzle “Hesitations” features a simple enough theme formula: “+ER”, all at the end of one of the themers words:

There didn’t feel like a lot of interesting wordplay clues, but there were a few tricky spots: