Theme: MY BAD – The last word of each theme answer is a synonym for “mistake”. 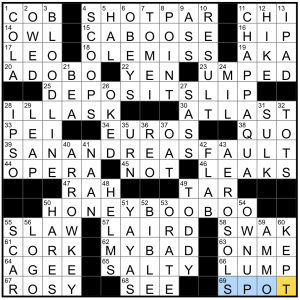 This is a classic “words at the end of the phrase connect” puzzle, which doesn’t really happen that much in the NYT anymore. As such, I was looking for another layer to the theme, but I think that’s it – I kind of wish there was something more to elevate it. I do like that all of the theme answers refer to other meanings of the “mistake” words, and the mirror symmetry is very striking.

The first three theme answers are nice but not too special.  The grid-spanning SAN ANDREAS FAULT is my favorite. HONEY BOO BOO feels a little like the odd theme answer out – it’s the only pop culture reference (although it’s a bit outdated; “Here Comes Honey Boo Boo” went off the air in 2014), and BOO BOO doesn’t quite feel like the same type of “mistake” as MISS, FAULT, or SLIP. This was an instant drop-in for me, but I could see it tripping up lots of folks less familiar with the TLC oeuvre.

The fill overall is very clean, and I like the standout CABOOSE and ARROW KEY. I did not know CHAPPAQUA (11d[Town in Westchester County, N.Y., where the Clintons live]) and needed most crosses to get it, but I was glad to learn it. Other answers I think could be tricky are LAIRD and AGEE, both of which I was luckily able to get off crosses. I had “made par” instead of SHOT PAR, so that slowed me down at the start of the puzzle.  Other than that, though, this puzzle played very easy for me – it’s very rare for me to finish a puzzle in under 3 minutes, which I did today.

Theme: SAND TRAPS (57a, [Golf hazards, or what the letters between the circles have fallen into]). The other theme answers are familiar phrases whose outer letters spell SAND. 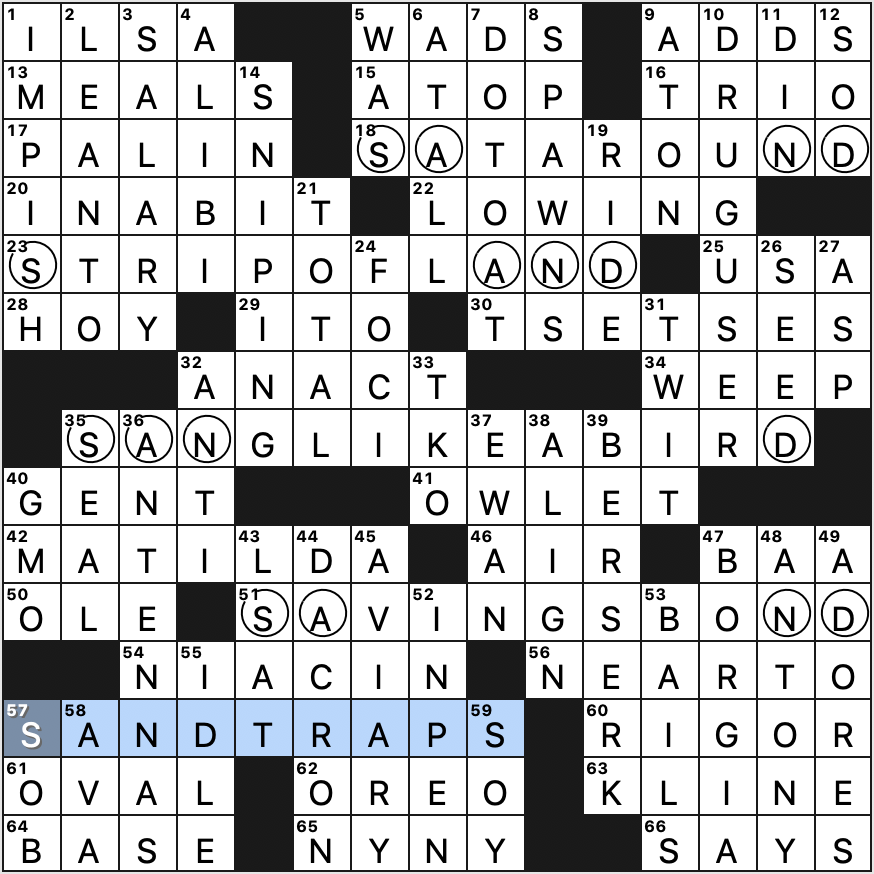 Works for me. Cute premise with solid-to-fun entries. I admit I wanted there to be a progression from S/AND to SA/ND to SAN/D. But that would only be three entries, and besides, nothing about the theme says there needs to be any sort of progression.

In the fill I liked MATILDA and BERSERK (though I can blame a certain video game for causing me to spell the latter one wrong). DRUG USER was a bit of a downer.

On the other hand, I loved the shout out to Kevin KLINE who tortured Michael PALIN in a scene in A Fish Called Wanda, one of my all-time favorite films. But why not cross reference their clues? Yes, I realize the puzzle also has Eric IDLE, and that both Pythons are clued as such, but that KLINE/PALIN scene was probably a big reason KLINE won the Oscar.

And that’s all I have. Nice puzzle. 3.5 stars. Enjoy the chips-up-the-nose scene from A Fish Called Wanda. 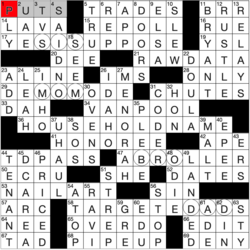 Titles and revealers have pros and cons: They can help newer solvers figure out how crosswords work, but I think requiring them all or most of the time, as many outlets now do, is a bit constraining. IMO it pushes constructors to OneLook phrases with “inside,” “outside,” “front,” “back,” etc. to come up with a theme, and great themes fall by the wayside simply because the constructor can’t figure out a good title or revealer.

So: I like this theme because it does have a revealer, but that revealer is not of the “I found this on OneLook” variety. What’s going on? In the middle at 36A [Instantly recognizable brand, and what can literally be found in this puzzle’s circles?] is HOUSEHOLD NAME. In the circled squares, you find nicknames for family members, or HOUSEHOLD NAMEs. Cute! 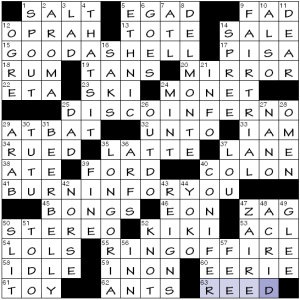 Self-evident theme, especially with the title.

This in contrast to my experience this morning, when I had to go out and a lot of the landscape was frozen over. Brr!

Easy-peasy straightforward cluing, so not much to highlight. 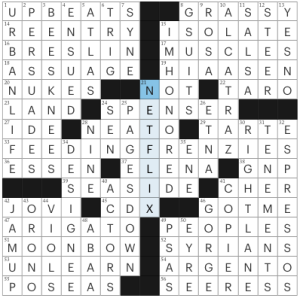 On the easy side for a toughest-of-the-week New Yorker, I found.

Fave clue: 21d. [Chill partner], NETFLIX. As in “Netflix and chill” for an invitation to come over for cheap-date sexytimes. Honorable mention: 36a. [German foodie’s favorite city?], ESSEN. Lowercase essen means “to eat” in German. We get the deli from the German Delikatessen, which doesn’t actually mean “delicate food”; it comes from a French word.

Thank you to a recent Learned League trivia question about the women’s singles champions in this year’s tennis Grand Slams. I had not remembered Rybakina at all … but luckily I only needed to name one of the three! The answers put ELENA Rybakina in my head. (She beat the Tunisian player Ons Jabeur.) 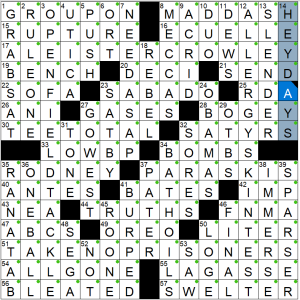 Did I guess ALEISTER CROWLEY [17a Occultist who created the religion Thelema] off the initial A- and a vague sense of the Ozzy Osbourne song. Did it then bias the rest of my solve to the positive? Yes on both accounts. ECUELLE [Soup bowl that shares its name with a French commune] similarly lived in some half-space of my brain, though I need to dig more into that.

Four grid spanners of varying flashiness (OPEN FIELD TACKLE, ALLERGY SKIN TEST, TAKE NO PRISONERS, the above-mentioned CROWLEY) lattice open corners and a deftly contained center area. I’m on record as being a fan of these types of grids – I want the chewiness that comes with 5-7 letter entries throughout – and while neither the cluing nor fill sparkled for me, the overall experience was enjoyable; not a brain-buster but not a speed race either. [Sub station?] for BENCH is a pleasant misdirect from both sandwich shops and electrical grids, and [Characters in a children’s book?] for ABC feels more obvious and less amusing now than during the solve, but I do try to hold on to my mid-solve impressions.