This week we’re looking for a two-word phrase. I spotted the clue for MALES (“Lions with manes”) while filling the grid and thought it was odd. Same for IRAN (“Major producer of iron”) and CLUE (“Hint on “NYPD Blue”). I scanned the grid after I completed it, saw no obvious theme entries, so I focused on the odd clues. I had the rabbit: there were eleven clues who’s last word had one letter changed from its matching entry: 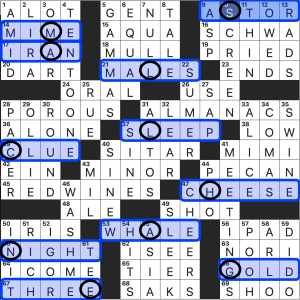 The changed letters spell our contest solution SMALL CHANGE. That was a 100% lock for me, but I didn’t initially see a connection to the title. So I asked my friends. They pointed out that that the “ending” word of each clue was changed. Also: the answer was in the grid, not the clues: you had to solve the grid to get the answer. Another solid meta from Matt; I enjoyed the mechanism. Readers: let me know how you made out, and please share your first foothold on the mechanism.