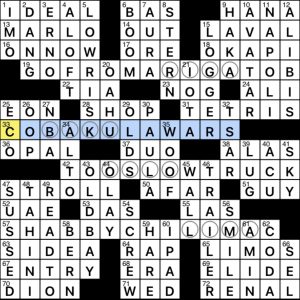 Theme: Familiar names and phrases that end in a word that is also a unit of measurement. The revealer is UNITS PLACE (57a, [Position just left of the decimal point, or the last five squares of each starred answer]). 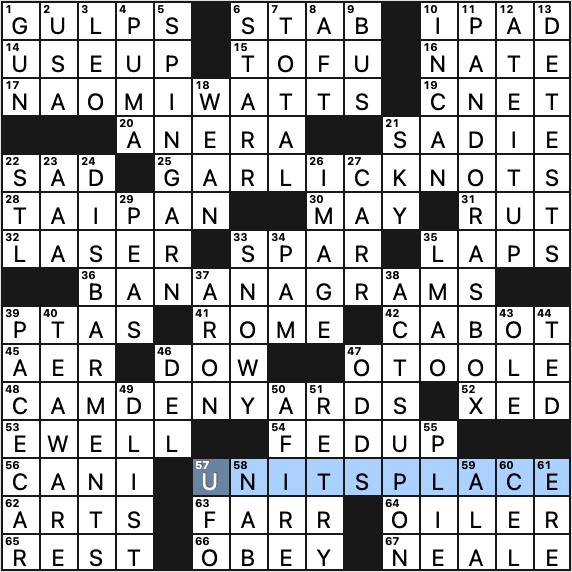 Nice. The first two entries made me think this was a rhyming theme, but the third one quickly dispelled that notion and replaced it with the correct one. I’m not sure I’ve ever heard UNITS PLACE before, though; if I have, it wasn’t very often. It’s interesting the revealer clue pointed out the fact that the units are all five-letters long. I thought that was odd. Why not just say “the ends of each starred answer” as is usually done? Is it because BANANGRAMS is typically seen as one word?

Moving on, PANDORA’S BOX is wonderful, of course. PACE CAR is nice as well, and the stacked duo ATE IT UP / DETESTS make a nice contrast. I didn’t know SPINGARN [___ Medal (NAACP award)], but that’s on me. DISBARMENTS and ACTS UPON aren’t too thrilling, but when entries cross multiple themers, choices become limited. 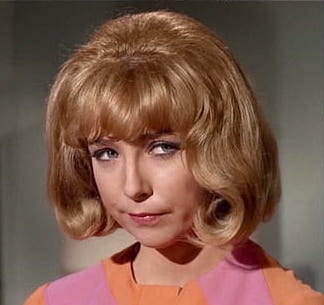 Besides them, the grid felt loaded with proper names: NATE  Robinson, Sebastian CABOT, Peter O’TOOLE, actor Tom EWELL, author Zora NEAL Hurston, and baseballer TED Williams as well as fictional SADIE Hawkins, PAM from The Office, and ARON from East of Eden. Some solvers may have felt FED UP after all that. 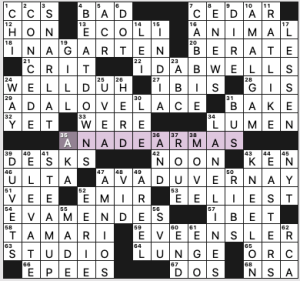 Cute theme! As someone who is continually on the lookout for fresh ways to clue various 3-letter names, I appreciate this word-ladder theme featuring seven names with the vowel-consonant-vowel pattern:

Fave fill: “WELL, DUH,” BEATDOWNS, CABBIE. Given the challenge of placing seven themers in a specific order, some of the other fill feels a bit crusty. AREEL, ROUE, ACR., EELIEST, plural EASTERS? Some of these mightn’t be in a newer solver’s vocab. 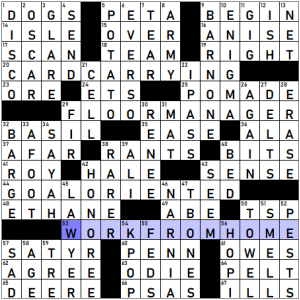 Theme: No reveal today — the title says it all. We have business lingo being recontextualized as job descriptions for sports officials:

These are fun, very on-the-nose job descriptions for sports officials that I hadn’t really considered before. Cute turns of phrase. Instead of a card-carrying union member, we have a yellow- and red-card carrying MLS official (very top-of-mind this week in the midst of the World Cup). Instead of a grocery store floor manager, we have an NBA ref managing the floor (I really wanted this one to be WHISTLE BLOWER). An NHL referee is “goal” oriented, and an MLB umpire most definitely could work from home [plate]. It’s not the most consistent theme set, since the answers cover many parts of speech (adjective, noun, adjective, verb phrase), but I actually enjoyed the flexibility afforded here because it allowed for such fun phrases.

Clean fill all around as one would expect from Universal, though the word HALE clued as [healthy] was new to me. The theme limits the room for lengthy bonus fill here, but Tim did a nice job working with what he was given. Tops for me are BAR NONE, ENIGMA, NARNIA, and T-BONES.

Standout clues include [Read at a supermarket?] for SCAN; [Ivy with a tradition of throwing toast] has me itching to dive deeper into the history of this tradition at PENN; [What the unique letters in “garbage” can aptly spell] creates an unflattering but clear image of a garbage BARGE, but I also learned there is a New York Times Best Illustrated Book from 2010 called “Here Comes the Garbage Barge!” by Jonah Winter that looks interesting; and, lastly, [One may put on a suit for a suit] is a great clue for LAWYER who might wear a nice suit to a lawsuit hearing. 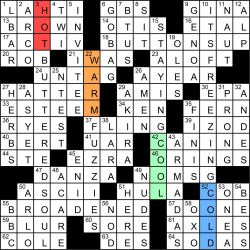 Hello there, all! Hope all of you are doing very well and continuing to stay warm along with avoiding getting sick, which I wasn’t able to do all last week. Only coming out of it now, and hoping the rest of the winter will be free of any more maladies.

Today’s theme beautifully displays what the mercury on our thermometers has done over the past few months, with the words HOT, WARM, COOL and COLD all appearing inside of longer entries and, from left to right, descending down the grid.

Not only do we have Isaac Hayes mentioned, but there’s also Otis Redding and the COLE family in this grid to really lock down the music aspect of this puzzle (62A: [Natalie or Nat]). It was at around this time seven years ago when I was assigned to cover a college football bowl game in Charlotte, but had to arrange my own lodging despite being a broke-as-a-joke reporter — which isn’t too far from what I am at this very moment. I booked the hotel, though it was one of those deals when the information of the hotel you booked wasn’t revealed until after booking the room since the hotel chain had many rooms available but didn’t want to advertise it that cheap and decided to withhold the info until after you paid. It turned out that the hotel chain I booked, for about $75 a night, was ALOFT, and, to this day, was the best stay I’ve had in a hotel (23A: [Flying high]). Had a suite as big as my apartment, a great view of Charlotte, and other cool amenities. Haven’t stayed at an Aloft since, but totally want to for old time’s sake. Unfortunately, I’ll probably have to play about $250 a night for that same experience unless I luck out again.

“Sports will make you smarter” moment of the day: OTIS (14A: [“King of Soul” Redding]) – I’ve been spending many nights before bed watching highlight reels of games from NFL seasons in the 1970s, which is perfect to mention today’s featured person, former St. Louis Cardinals running back Jim Otis. (Yes, we’re talking the football Cardinals who are now in Arizona, not the baseball St. Louis Cardinals.) Otis played six of his nine seasons in the NFL in St. Louis, and his best year came in 1975, when he led the NFC in rushing with 1,076 yards.

Today’s theme is sort of Tom-Swiftie-adjacent with variations on “Wow!”. I can’t exactly explain it so I’ll just show you. 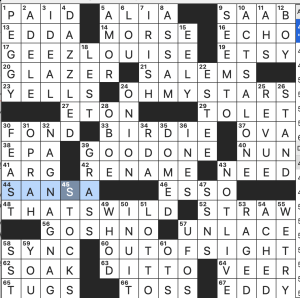 Cute theme! It’s consistent and not too tough for a Tuesday without being predictable. The last two are particularly amusing.

What I didn’t know before I did this puzzle: that Sophie Turner played SANSA Stark on “Game of Thrones.” Everything I know about GoT, I learned from crosswords. 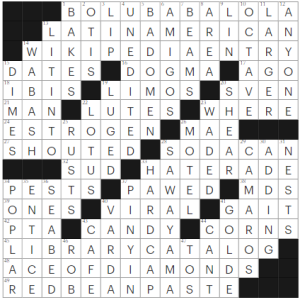 Directly with 1-across I learned something—but had to wait for all the crosses. [Author of the 2022 romance novel “Honey and Spice”] BOLU BABALOLA. If you had told me it was BOLUBA BALOLA I wouldn’t have batted an eye. Here’s her web page.

Editor:  Erik Agard
Theme: The first word of each theme answer can be preceded by the word “soul” 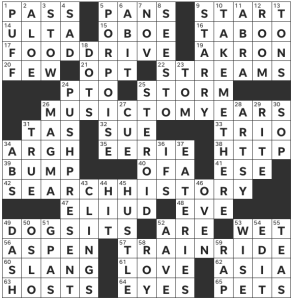 This is a cute theme – if it had run in two months it would have been very valentine’s day appropriate. I like all the theme answers, but the last two tripped me up in that I tried “browser history” and “train trip” before SEARCH HISTORY and TRAIN RIDE.

Speaking of soul mates! There were a bunch of paired clues/answers in the puzzle that tied disparate words together in cool ways. Some examples:

I loved PUSH PRESENT and TAKE ME THERE, and the trickiest part of the puzzle for me was the area around ELIUD, since he was new to me and has an unusual name.