Posted on December 13, 2022 by pannonica
untimed 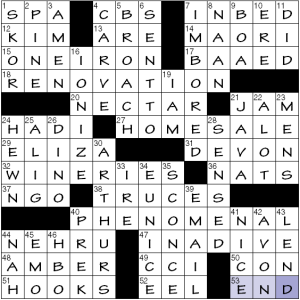 pannonica here, pinch-hitting for joon, as his computer has unfortunately gone cacky.

Had I known that I’d be writing about the puzzle I would have done you all the favor of recording my times on this one. As it is, I can report that the crossword went fairly quickly and the meta fell quickly too, with a slight delay while I made the leap to additional step.

The four longest across answers in our 13×13 grid contain the names of US cities, and each is four letters long. Shades of the instructions!

So we have RENO, MESA, ERIE, and NOME. What next? Their initial letters don’t spell anything, yet it seems we need to somehow extract one letter from each. The short leap here is to extend these locales to their respective states. (“Name That State”?) NEVADA, ARIZONA, PENNSYLVANIA, and ALASKA. The initial letters of these spell NAPA (pop. 77,480 in 2021), which I suspect most of us will know from the namesake valley rather than the town itself. The third theme answer clinches it for us: “Our meta city and its surrounding area …” and as a prominent AVA (American Viticultural Area) it is most famous for its WINERIES.

This seemed very much like a week 2 MGWCC; that one small extra step furnished the obstacle that separates it from an easyish week 1.