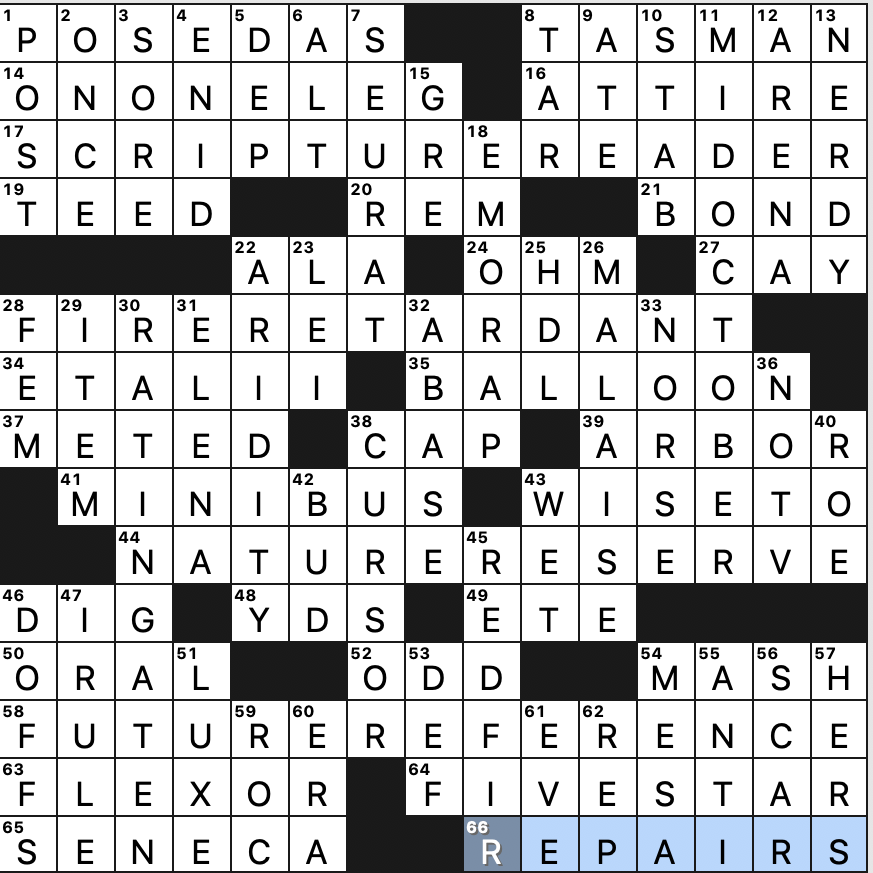 Serviceable theme with fine theme choices. Quite a lot of real estate devoted to the theme as well, and plenty of long fill besides.

Part of the odd construction is due to the 7-letter revealer’s placement in the bottom right. Often we’d see a revealer of that length in the center of the grid which might allow for more flexibility in the corners at the cost of tightening things up in the middle. But despite the density of theme in that SE corner, it’s filled quite nicely, and the other big corners have some nice assets as well.

FIVE-STAR is especially impressive considering it’s sandwiched between two theme entries. I also liked SEURAT, MALAISE, and MINIBUS. RATING A TEN doesn’t feel quite like an in-the-language phrase to me, and MID-OCTOBER is only so-so, but consider that they each cross three theme entries.

All in all, I’m having a hard time generating a lot of excitement about this grid, but it definitely works and gets the job done. 3.25 stars. 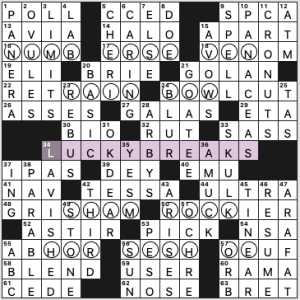 When I saw that RAINBOW in circled squares, I filled in LUCKY CHARMS for the revealer, despite the clue not matching: [Fortunate circumstances … or a punny hint to the shaded letters]. That’s actually LUCKY BREAKS, and things considered lucky occupy the circled squares and have “breaks” from the black squares. So NUMB ERSE VENOM hides NUMBER SEVEN, RETRAIN BOWL CUT has RAINBOW, a SHAMROCK lurks in GRISHAM ROCKIER, and HORSESHOE hides in the ungainly ABHOR/SESH/OEUF combo.

Fave fill: I wouldn’t mind being LAVISHED with gifts! Not my fave fill: ERSE (I’d wager that 90% of the people who know this language name learned it from crosswords), NAV, SESH, OVULES, British-spelling OCHRE, AMUCK. Do you like ARBY’S? Their regrettable slogan is “WE HAVE THE MEATS®”.

42a. [Actress Thompson of “Sorry to Bother You”], TESSA. Just saw her in Thor: Ragnarok and Westworld in the past week. She really is luminous.

5d. [French beloved], CHERI. This is what Frenchie, aka Serge, sometimes calls Kimiko on the Amazon evil-superhero show, The Boys. Mostly he calls her mon coeur, which is impossibly sweet for such a gruesomely violent show. 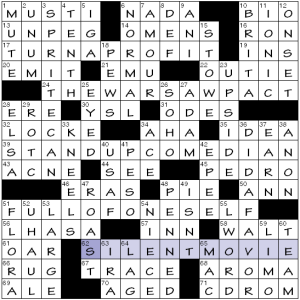 I kind of thought I saw something about the theme with the first long entry, but wasn’t able to make sense of it through the following ones. So indeed I needed the revealer for the 34a AHA moment to 44a SEE (speaking of the title’s ‘seen’) what was really going on.

One could quibble that even though the films aren’t ‘heard’ they’re still seen and hence are still present, but that’s probably being unnecessarily wetblankety. Nevertheless I might have found it more impressive or rewarding if there were a common factor among the movies, aside from the brevity of their titles. 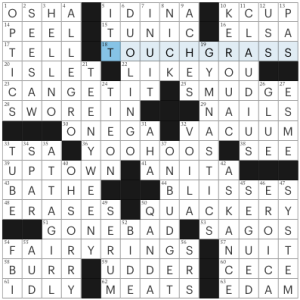 So much fun and conversational and slangy and girltalk content in here!

New to me: [“Get off the Internet,” in Internet-speak], TOUCH GRASS. Is that like “eat dirt”? I also learned FAIRY RINGS, or [Circular mushroom formations that have supernatural associations in some cultures]. Creepy!

The chatty, “living today,” and girltalk vibes: CAN GET IT (the “it” is essentially the same as the “it” in the sex synonym “doing it”), BLISSES out, “HELL NO,” TEENY-WEENY, period ACHES, a mascara SMUDGE, squoval (squared oval) and stiletto (finger)NAILS, and fake eyelash GLUE. If you were stuck where GLUE and ESME cross SMUDGE and NAILS, well, the endings of SMUD**, VAC***, and CLAU**** do some heavy lifting.

Crosswordese vibe with Russia’s Lake ONEGA and SAGOS. Crossings all seemed eminently fair to me.

Fun clue: [App that might teach you how to say “I am eating bread and crying on the floor” in Norwegian], DUOLINGO. 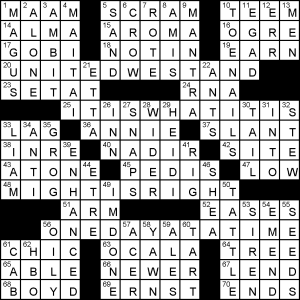 Parker Higgins’s theme today gives us 4 pairs of NO{4}/NO{4} phrases that start from the same number, all with a particularly American bent to them. NOPAIN/NOGAIN is familiar as a [Mantra on embracing difficult], but the [Idiom meaning “easy peasy”], NOMUSS/NOFUSS is usually stated as MESS here. The [aphorism excusing misconduct that didn’t cause damage] is a more universal NOHARMNOFOUL. Lastly, a phrase I had never heard of at all, which sounded vaguely financial: [expression describing an abscence without leave] is NOCALLNOSHOW. The grid also feels an unusual diagonal symmetry that is hurting my head a little when I look at it too closely.

Tricky theme today for me but great fill and, as always, fun cluing! 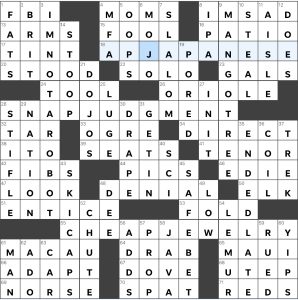 While my high school had other Advance Placement classes, APJAPANESE wasn’t one of them—though I wish it had been! SNAPJUDGMENT was an immediate fill for me, with great cluing. CHEAPJEWELRY took me a couple of crossings at the beginning, since “costume” was my first instinct. h/t to Sally and her blog for explaining today’s theme! I kept looking for an outfit, or multiples but this one just didn’t jump out at me.

Stumpers: ENDEDLATE (kept thinking about shows that get extended another season), DRAB (only “dull” was came to mind), and IMNOTAROBOT (needed most crossings before I saw it, oddly)

There’s usually just enough misdirection in clues that Zhouqin’s puzzle always more of a challenge and take me a bit longer to solve, but I get there in the end. I’ve certainly improved and feel quicker over the months that I’ve been blogging on here, though my times still say otherwise; I’ve come to truly enjoy these puzzles, ready to see if today I’ll solve then any faster but regardless they remain impressive solves, with really smart themes and given the sheer number, awe-inspiring for a hopeful constructor. 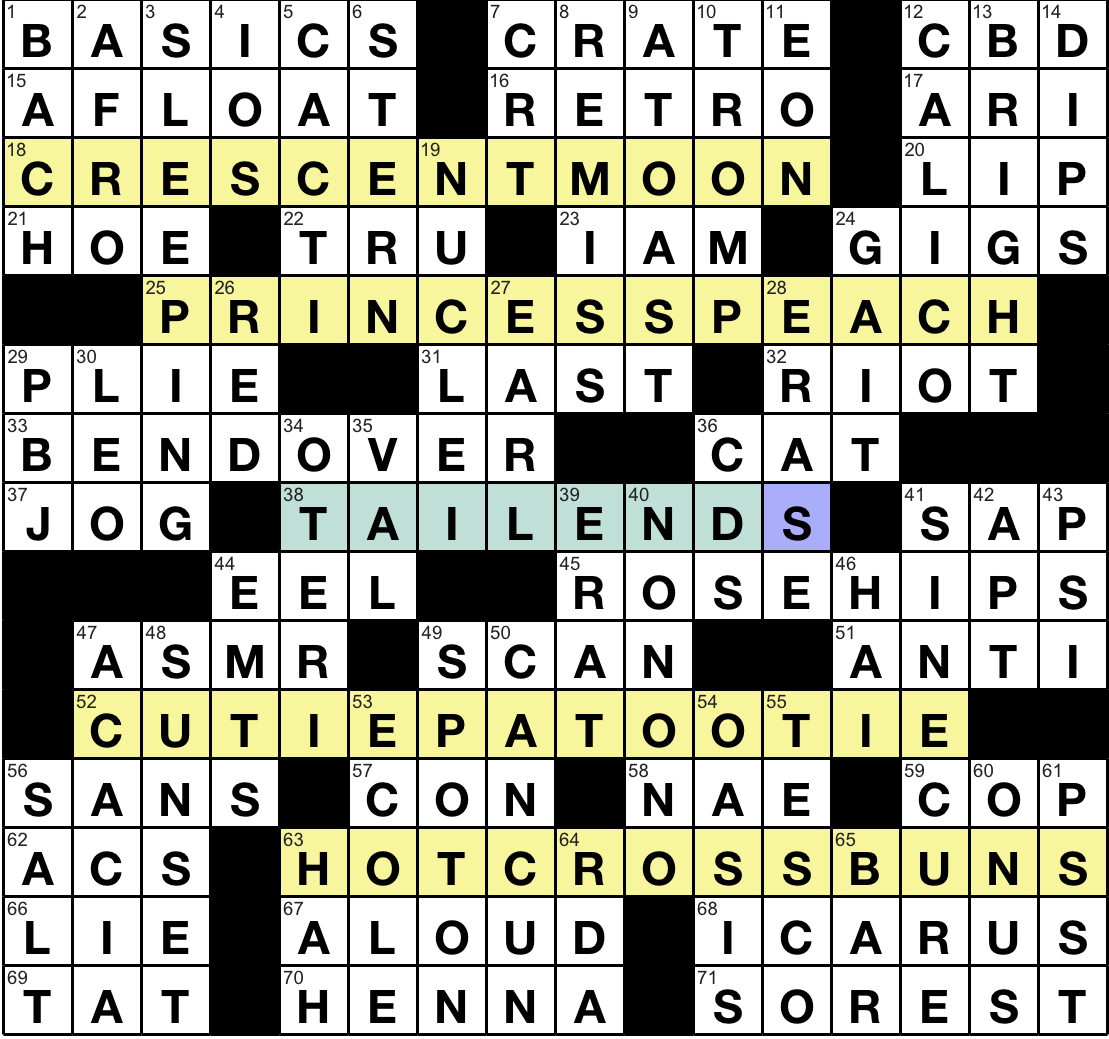 This week’s AVCX Classic was a cheeky puzzle with a 2/5 difficulty from Zaineb Akbar.

This was a fun quick solve that had me smiling the whole time. I spent the  top half of the puzzle wondering what CRESCENT MOON and PRINCESS PEACH could possibly have in common and loved the center revealer. Super smooth grid work throughout that allowed for a great flow while solving.

Couldn’t help but think of ‘HOT PATOOTIE‘ while solving…