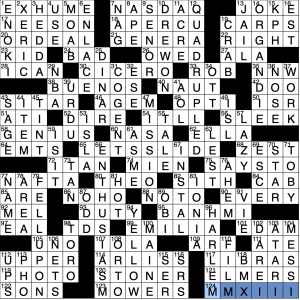 hello and welcome to episode #760 of matt gaffney’s weekly crossword contest, “Word for Word”. for this week 3 puzzle, the instructions tell us that this week’s answer is something you’ll be if you get the meta. okay. what are the theme answers? i don’t know. it’s a big grid (19×19), and the only explicitly indicated themer is the last across answer: {Year the crossword puzzle celebrated its 100th anniversary; or, where to find the meta answer} MMXIII. that’s 2013 in roman numerals. what does it mean that that’s where we’re to find the meta answer? i don’t know.

my first thought was to check the mgwcc archives for 2013. i didn’t really think it made sense to look through 52 puzzles for anything that stood out, but since the 100th anniversary of the crossword was in december, i thought i’d at least look at the puzzles from december 2013. i did find this puzzle which i had missed the first time around since i often take this week off from blogging the mgwcc, and it’s a tour de force, but i don’t see that it necessarily has anything to do with this week’s puzzle. i also found another puzzle called “word for word”, coincidentally also a year-end puzzle but from 2021, not 2013. it’s a beautiful meta, and although it does have the same title as this week’s puzzle, i don’t see what else it has to do with anything.

what else can it be? i suppose we could look at entries 20 and 13, although writing it as a roman numeral definitely suggests that we should interpret MMXIII as “two thousand thirteen” instead of “twenty thirteen”. 20-across is {Nightmare} ORDEAL, and there’s both a 13-across {Gag} JOKE and a 13-down {One corner of a Monopoly board} JAIL. neither of those seems to point to anything. but both {Nightmare} and {Gag} are one-word clues, so maybe we’re supposed to be looking at one-word clues again (as in the 2021 meta of the same title). it can’t hurt:

okay, this is definitely something. there are 26 one-word clues, one starting with each letter of the alphabet, and their 26 answers also start with A-Z once each. but what’s the next step? sorting them alphabetically by clue or by answer, presumably, but nothing jumps out at me either way. i suppose Gag => JOKE and Nightmare => ORDEAL are a starting point, but i’m not sure what i’m supposed to see there either. chaining the letters in order from there doesn’t spell anything out that i can see. weirdly, P is a fixed point due to Pic => PHOTO.

well, i got kind of close, maybe, but at the last minute, and now i’m out of time. oh well. let me know in the comments what i missed.