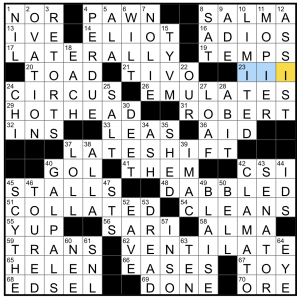 Today’s theme: LATE SHIFT (Overnight work assignment … or a hint to understanding four rows of answers in this puzzle)

Fun puzzle from Claire and Rachel.  It became clear that the four LATE entries were clued as if LATE wasn’t there, and then I noticed that another four answers were missing LATE in order for their clues to make sense.  It was tricky in that the direction that LATE shifts is not uniform (down two rows for the first and third themers, up two rows for the second and fourth themers).  Also, I wouldn’t say the LATE “shifts” per se, as it doesn’t simply rise or fall, but rather, gets inserted at an arbitrary location.  But LATE INSERTION isn’t very idiomatic, and also, I don’t even want to speculate on what joke would be most appropriate at this juncture.  EDIT: Just realized they are supposed to be paired with consecutive across clues, rather than up/down two rows within the same section the way it first appeared.  Leaving my original misinterpretation for posterity, and to let the world continue to contemplate LATE INSERTION.

Cracking: GAL PALS — TIL this was a euphemism for a lesbian couple.  Is there a male equivalent?  BOY FRIENDS?

Slacking: ALA and ALLA appearing as vertical fill, and in relative proximity.  It was not ALLA dream.  I went back and checked.  They were both still there.

Sidetracking: TIVO — if you’re Of A Certain Age, you probably still think of TIVO as a relatively modern contraption.  Allow me to disabuse you of that notion with this TIVO commercial from 2000, which feels more like it’s from 1987.  Time is a flat circle.

Theme: DISAPPEARING ACT (64a, [Part of a magic show, and the key to understanding this puzzle’s one-word clues]). The clues of the other theme answers don’t make sense until you add in the letters ACT. 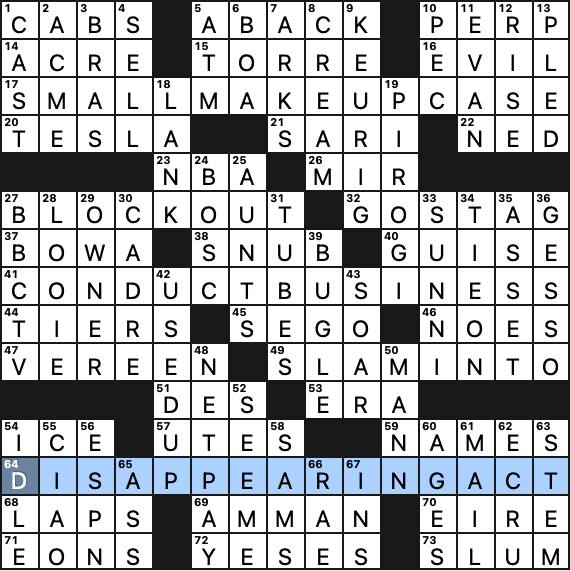 I finally figured out what was going on by the third entry but still needed the revealer to give me the full aha moment. I certainly enjoyed sussing it out and making sense of it all.

But I finished with an error due to 27a. I wanted BLACK OUT which seemed to make perfect sense, and I would never have considered BLOCK OUT as a better alternative. This made 29d [One with a title] look like A_NER. I knew it was a stretch, but one could argue ABNER’s title was Li’l. This meant 37a [Larry who played for and managed the Phillies] look like BOBA which seemed perfectly reasonable to me since I’ve never heard the name. And I would argue that BLACKOUT, ABNER, and BOBA make for better fill than BLOCK OUT, OWNER, and BOWA.

So that was frustrating, but otherwise I enjoyed the solve. There isn’t any fill longer than six letters, but KEURIG, PIROGI, GO STAG, Ben VEREEN and NET PAY are all good.

I enjoyed the theme, but I felt one answer needed some adjustments. 3.5 stars.

Grab some popcorn for this fantastic puzzle! 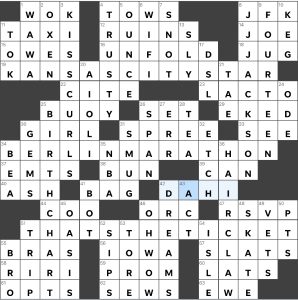 Theme: the last word of each themer combines with the word MOVIE to create new phrases

With a quick process and of elimination, KANSASCITYSTAR filled in fairly quickly for me—I was primed with growing up with the Minneapolis Star Tribune too. BERLINMARATHON was also an easier fill. With the few crossings already in place when I got to THATSTHETICKET, it too dropped smoothly into place. Combined with the theme hint in the title, we get: MOVIE STAR, MOVIE MARATHON, and MOVIE TICKET.

Quick one today because I’m leaving to catch a flight after finishing this write up!

Theme: Each theme answer should be reparsed by moving the word “out” to the end of the clue. 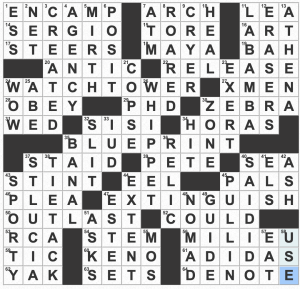 I liked this theme a lot! I was surprised how many phrases there were that work with “out” both at the start and end of the word, especially when the meaning changes. The title is also great, plus the theme as a whole reminded me of “Survivor”, one of my favorite shows.

This played harder for me than most Universal puzzles, I think because of a mixture of proper nouns I didn’t know (SERGIO Aragones, LA BAMBA being a film title), and words that didn’t immediately come to mind (COPSE, STAID, ENCAMP, MILIEU all took a while). I also really wanted “tie rack” and not TIE TACK for 38d [Neckwear holder]. Favorite answers in the puzzle included WHIPPET and the clue [High rollers in Chicago?] for ELS. 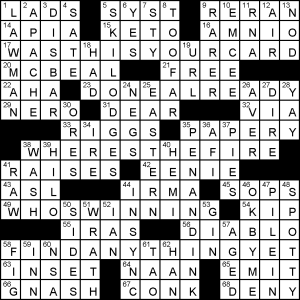 Each of Damon Gulczynski’s long across answers has a “in-the-language” [___ Question] clue with the answer being a question that is taken quite literally. The best thing about this is the clever and fun choices of theme answers used: 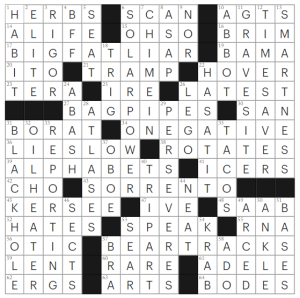 Bit harder for me than the usual Thursday New Yorker puzzle. And you?

40d. [Divided in three], TRIPART. I feel like tripartite is a good bit more common, yeah?

Too hot: I like this clue for LIES LOW, [Keeps out of trouble until the heat dies down], but would prefer if the entry didn’t cross OIL HEATER. 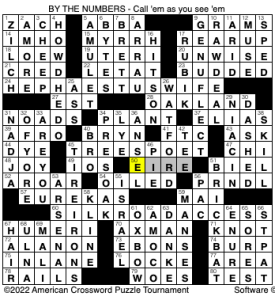 As BEQ notes in his comment, this puzzle was Puzzle #5 in this year’s ACPT. It was really clever and well done. Each of the theme answers were easy to sound out, even if it took me awhile to get the mechanism.