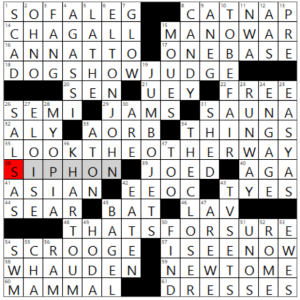 Seldom does a crossword truly amuse me, but 38a. [Secretly pass gas?] for SIPHON? *slow clap* Then there’s also the old ACPT callback of 43d. [Objects thrown out hotel windows, in a rock ‘n’ roll cliché], TV SETS. (If you know, you know.)

Fave fill: Marc CHAGALL (didn’t know “Spoonful of Milk”), LOOK THE OTHER WAY, “THAT’S FOR SURE,” SCROOGE, W.H. AUDEN, ELTON JOHN, KHARTOUM with its Arabic translation, “elephant trunk,” THE CLOSER, and “TO BE FAIR,” which is a fun phrase if you’ve watched the Canadian comedy Letterkenny. (Relevant clip here.)

Less keen on bits like ONE BASE, A OR B, and crosswordese AGA, TYES, MOUES.

3.8 stars from me. Thanks for the smiles, Brendan!

Theme answers consist of familiar two-word phrases where each word is also a Major League Baseball team name (in the singular). 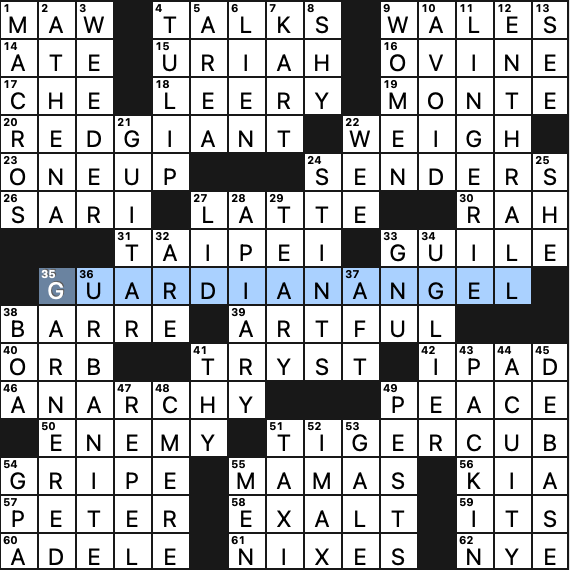 Fun theme! I wanted more but I wonder if any more such phrases exist. Finding three to fit symmetrically seems remarkable enough.

I especially like the timely addition of the Cleveland Guardians who just changed their name this year. Aside: I’m not much of a baseball watcher, but that’s a terrible name, isn’t it? This from a franchise that seems to have a history of terrible names. Per Wikipedia, they’ve been the Rippers, the Lake Shores, the Bluebirds (or Blues) — this one’s not bad, the Bronchos, the Napoleons (or Naps), and lastly the Indians. They should’ve gone back to the Bluebirds.

Anyway, with a lighter-than-usual amount of theme material, we get some longer stacks in the corners with LINGERIE being the funnest of the lot. Everything else is solid though, and the solve was smooth and quick.

Clue of note: 24a. [Texters, at times]. SENDERS. Meh. However, I can’t think of a better option and the other examples in the Cruciverb database aren’t so hot, either.

Theme: Each theme answer is a Down answer starts with a word that can precede power, making them “higher powers.” 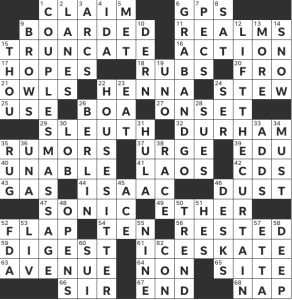 I love that there were four themes in this grid, and each them of them felt like they were very evocative “higher powers.” COUPLES MASSAGE was the first answer that I filled in and then I cruised through the Down answers ironically, until I got to GRAB AND GO, switching back to Across for a bit. LIFT THE CURTAIN and HOUSE SITTER were two of the last entries to make it in for me, especially because I had trouble with the cross at SER and DURHAM (DUOHAM sat in my puzzle for longer than I would’ve liked). I was also thinking more geographically for 22d, and it wasn’t until I got most of the crosses that I put two and two together for HOUSE SITTER.

A few Friday faves for me 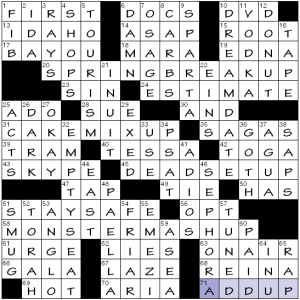 Pretty basic but solid theme here. The word UP gets suffixed (with a hyphen) to various phrases to alter their meanings.