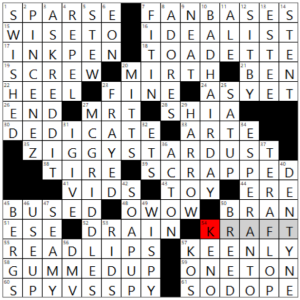 Some months back, I enjoyed a Carleton College alumni event on Zoom, featuring constructor/Fiend blogger Sophia Maymudes (like me, a Carleton grad) and a current Carl, Billy Bratton. So I feel like I’ve met Billy, but have not. He seems to specialize somewhat in themelesses, I think? My favorite crossword type.

This puzzle played more like a Friday NYT, while yesterday’s played tougher. Was it a flip-flopped weekend for you, too?

Fave fill: FAN BASES, ZIGGY STARDUST, READ LIPS, GUMMED UP (but not SAT UP, SOAP UP, USE UP), SPY VS SPY, SWISHED, MCGRIDDLES, BAD HAIR DAY.

Besides the four UP phrases, we’ve got FIT IN, SIT BY, and ACT ON in the “stretched out with a li’l preposition/adverb” category. I feel like such entries are used far more now than they were a decade ago. Longtime solvers, what say you? I feel like they dry things out, but concede that they’re better than, say, ORONO or ALENE. (I will call foul on SIT BY and SAT UP appearing in the same grid. That’s the same verb!)

I do use Reddit some, but can’t say I’d been aware there was an ASK REDDIT page. The clue gave me a solid idea of what it’s like, though: [Forum that provides material for many BuzzFeed articles]. My favorite subreddit is OddlySatisfying. 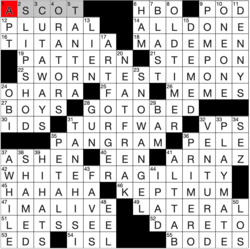 In this themeless, I enjoyed the wordplay more than I did the YEKIOYDs (that’s short for “you either know it or you don’t,” for those who are unfamiliar with that initialism from LearnedLeague:

I’m not opposed to YEKIOYDs altogether; one can learn something after the fact from them, and if I’m going into a puzzle prepared for a few, as I am with a New Yorker themeless, that’s fine. But when I can drop a 14 and an 8 into a Saturday newspaper puzzle with no crossings, I want to be challenged more than that. 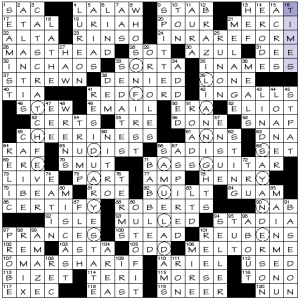 I neglected to look at the title beforehand and ignored the circled squares during the solve, so had no idea what the theme might be.

The revealer turns out to be high up on the righthand side.

From left to right we have:

Note how the circled letters (the ‘dropping balls’) are consistently spaced—a very nice touch. In light of the arrangement of the theme answers, the unusual location of the revealer makes sense.

Theme-adjacent: 20a [Serve the champagne] POUR, 59a [High spirits] CHEERINESS, 73a [Like the “New Year’s Rockin’ Eve” airing] LIVE. 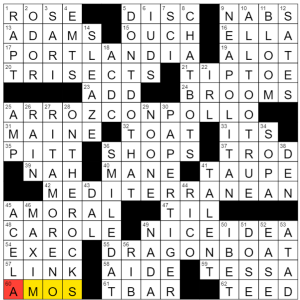 This was delightful! I appreciate the representation here: I count five (?) uses of Spanish language in clues or entries (I love cluing SOPA 34D as [Gazpacho, por ejemplo]), plus we get SARI, DRAGONBOAT, TESSA, PAPERTIGER and DAL. To boot, this grid is extremely clean!

Nancy says “she finds crosswords to be more than just puzzles — they are an opportunity for others to feel seen. Words matter, now more than ever before. Her goal is to imbue her crosswords with as much of her personal experience as she can, emphasizing BIPOC terms.” (copied from her Inkubator bio).

This is Nancy’s Universal debut! Congratulations :) She is also on the 2023 Lil AVC X roster; I’m looking forward to many more fun puzzles from her in the coming year.

BROOMS 24A [What quadball players and sweepers hold]

Thank you Nancy, and Happy New Year to all!
(in response to Amy’s review – my favorite subreddit? r/crossword, obviously ;) 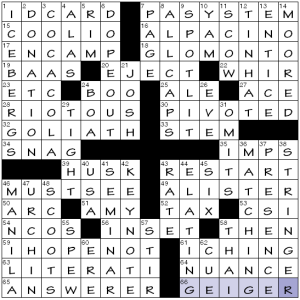 Rather a striking grid design today.

Despite the ‘less rough’ denotation, I was stymied for quite some time on this one. Finally I was able to chip away into the bottom half of the grid (the puzzle is nearly two separate halves), completing it, then expand to the top left, and finally struggle through the top right.

Mostly enjoyable crossword, but that bipartite grid stifled some of the pleasure.