Happy New Year! I hope this moment of transition finds you well, with bright promise in 2023.  Luckily, we get to start the year with this fun puzzle from a trio of super talented constructors! 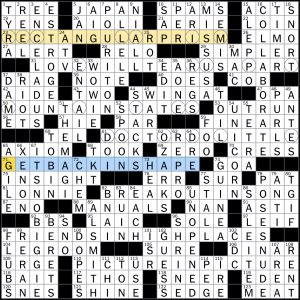 – 23A: RECTANGULAR PRISM [Stick of butter, geometrically] with RECLAIM encircled
– 71A: GET BACK IN SHAPE [Recommit to one’s fitness … or what 23-Across depicts literally]

RECLAIM (GET BACK) is in RECTANGULAR PRISM (SHAPE)

– 31A: LOVE WILL TEAR US APART [Seminal 1980 hit by Joy Division] with ERUPT encircled
– 82A: BREAK OUT IN SONG [What characters in musicals often do … or what 31-Across depicts literally]

ERUPT (BREAK OUT) is in LOVE WILL TEAR US APART (SONG)

– 50A: MOUNTAIN STATES [Colorado, Idaho, and Wyoming, among others] with MATES encircled
– 98A: FRIENDS IN HIGH PLACES [Useful people to know … or what 50-Across depicts literally]

– 61A: DOCTOR DOOLITTLE [Hit 1998 Eddie Murphy comedy based on books by Hugh Lofting] with DOODLE encircled
– 110A: PICTURE IN PICTURE [Screen feature that facilitates multitasking … or what 61-Across depicts literally]

WOWIE, talk about theme density! In each pair of themers, the first contains a word spelled out sequentially, while the second reimagines a common phrase to describe that word-within-a-phrase. There are other options that could make for themers in a puzzle like this, but I was really happy with the ones that made the cut here, and the timing of this puzzle is probably not unrelated to the GET BACK IN SHAPE entry that resonates with January 1. Nice job, constructors!

Other random thoughts:
– This was a really clean grid that filled super quickly for me. Here’s hoping many of you started the year with quick times, too!
– I cracked up at the pairing of the “Stick of butter…” clue with GET BACK IN SHAPE in the first pair of themers. Which is it??
– 78D: POSES NUDE [Barely sits still?] – Clue of the puzzle? This made me smile.
– 103D: CDC [Agcy. that advises against eating raw cookie dough] – But it’s so tasty! 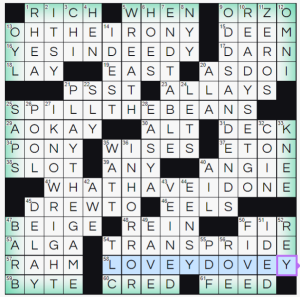 TRANSPRIDE stacked with LOVEYDOVEY feeds the soul, don’t you think? 🏳️‍⚧️😍 “Blackout” is on my TBR for 2023! The clue for BYTE feels fun and fresh, but thank goodness for the “to a computer” or I would have been lost!

Thank you Rafa, and Happy New Year to all!

Evan Birnholz’ Washington Post crossword, “Out With The Old, In With The New” —Matthew’s write-up 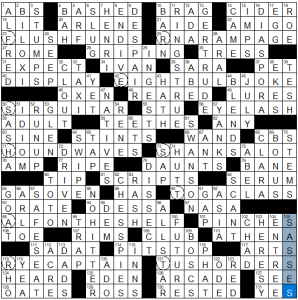 Evan Birnholz’ Washington Post crossword solution, “Out With The Old, In With The New,” 1/1/2023

So the “new” letters (in the solution grid) spell “FRESH START,” while the “old” (from the base phrases) spell “SO LAST YEAR.” Apt phrases indeed.

Even with the constraint of a phrase, Evan would have a lot of flexibility setting this grid up, so I’m glad to see both the inclusion of a second phrase and *ten* themers in this one, especially as for my money, it didn’t sacrifice fill quality. Mileage with humor-based themes will always vary, but I liked the bottom half of the themers more than the first — “TUSH ORDERS” is a gas — which is always pleasant to keep my attention through a grid, especially after the theme has become apparent.

Theme: Zodiac signs are found anagrammed within familiar phrases. The revealer is OUT OF ORDER SIGNS (119a, [Indications of disrepair, or the zodiacal scrambles in the starred clues’ answers?]). As a hint, each clue also tells us the appropriate zodiac symbol. 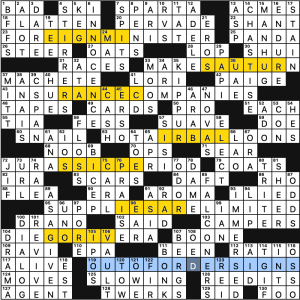 Nice! I especially liked that there weren’t any circles in the grid or really awkward clues telling us which squares to count. Granted, I didn’t catch on until I got to the revealer, so the theme didn’t actually help me solve the puzzle, but I liked the extra challenge of finding the anagrammed words on my own. The chosen entries are all perfectly in the language, and the revealer provides a satisfying aha moment. Well done.

The fill is solid though not as flashy as we sometimes see in a 21x grid. Highlights for me include FALCONERS, MACHETE, Yom KIPPUR, and MANHUG (though I think “bro hug” is more common). Otherwise, the fill was smooth throughout. Okay, Jyn ERSO of the film “Rogue One” is probably new to a lot of people. But what a handy name to have in your word list!