Note: No WSJ puzzle today due to the holiday.

Happy New Year everyone! I’ve already written this puzzle’s date incorrectly multiple times, so it’s off to a great start for me.

THEME: “It Had To Be You” – each theme answer contains the string “BU” twice. 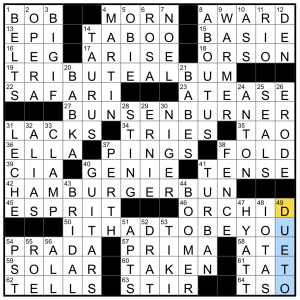 I decided to solve this puzzle without looking at the revealer until I reached it naturally, so it took me a while to get what the theme was. As I solved, I noticed that each theme answer had two Bs, but that was it (and the only reason I knew that much was because the B’s were the last entries I put in to TRIBUTE ALBUM). I like all the theme answers; they’re all solid if not truly stand-out, and the rhyme in the clue for HAMBURGER BUN is cute.

The revealer itself is clever, I like how it repurposes all three of the last words of the song title. When it comes to the song itself, I know it but am not sure I could sing any lyrics besides the title…. That’s all to say that I think it’s fair game for a Monday, but if you don’t know the title you could get stuck there.  Oh, and it might have been elegant if there were no B’s or U’s in the puzzle besides the ones in the theme answers, but I have no idea how possible that would be, and anyways clean fill should probably be the priority on a Monday.

This puzzle played really easy for me, timewise. I think there’s a couple reasons for that – there aren’t many longer answers that require crosses to get, and there’s a large amount of (fairly clued!) proper names that I was able to quickly drop in. The only negative in the fill is the sheer amount of three letter words clogging up the corners, but the nice open middle makes up for it. My favorite piece of fill is BABKA and I’m surprised but not displeased that the NYT is allowing ASS-backwards into their puzzles.

Congrats to Seth on a great debut puzzle! 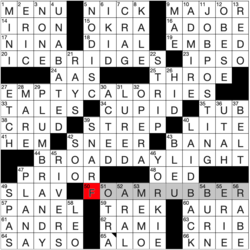 This puzzle’s on fire! The revealer at 54D [“Hamilton” song about destroying love letters, or what one can do to the ends of the answers to the starred clues] is BURN. That is, each theme entry is a two-word phrase, the second word of which can be “burned.” I thought the song clue was quite a deep cut trivia-wise for Monday — I see constructor or editor was trying to avoid actually cluing BURN in a definitional sense that gives too much away, but I also think the clue still could’ve been done with no need for factual knowledge. [“Oh snap!”…] or [Witty insult…] could’ve accomplished the same effect.

Anyway, on to the theme answers: 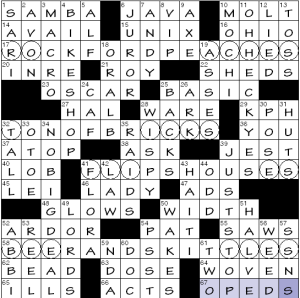 Insects and other small arthropods are a perennially popular vehicle for crossword themes. Perhaps it’s because there are so many with short names, and perhaps that in turn is because the insects themselves have a long and intimate history with humans and it’s more efficient to refer to them thus. Here I am getting philosophical and out of my depth already.

Not sure that we’ve seen this precise theme before, but casually speaking, it seems likely to me. It done well enough here. 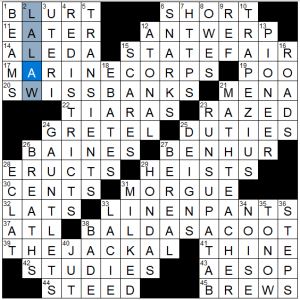 Clean, clean grid today from BEQ, who can take liberties in the 6-8 letter fill sometimes. But other than BALD AS A COOT [38a Unlocked?] and I suppose ERUCTS, this grid is full of in-the-language (or at least in-the-crosswords) fill. And lots of gentle, but amusing, misdirection in the clues.

Perhaps the right and lower area is easier than the left and upper? That may just be me failing to piece together TRANSIENTS [5d They won’t be here for very long] or BAINES [26a Presidential middle name]. 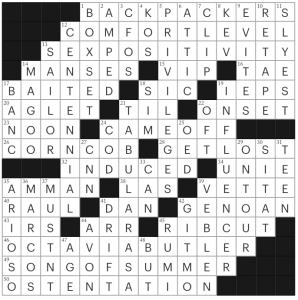 Today’s my last day of holiday break, so I really made of most of lounging around doing nothing and forgot to blog till late evening. It happens.

I like this grid with its dogeared corners allowing the seldom-seen 12- and 13-letter entries stacked with an 11. BACKPACKERS, a movie set intimacy coordinator’s care for actors’ COMFORT LEVEL in sex scenes, SEX POSITIVITY up top, OCTAVIA BUTLER down below. I’ll raise my hand for never having heard of 49a [1968 Ken Russell film about Frederick Delius, named for one of Delius’s tone poems], SONG OF SUMMER. I’ve heard of Ken Russell, but not the movie or the poet. Just me?

Fave fill: CENTENNIAL and INFLUENCER (super-tough clue for the latter: [Wanted poster?]—meaning an Instagrammer whose posts are “wanted” by their followers). Also cool to see IEPS; if your kid needs a classroom aide, speech therapy, physical therapy, or occupational therapy, they may have an IEP plan at school (for conditions that fall short of the “disabled” category, your kid may have a 504 plan for accommodations). If you needed all the crossings to fill in IEPS, well, now you know a bit more about it.

Less keen on French UNIE, butcher lingo RIB CUT (no idea what a cowboy steak is, and please don’t elucidate), SIT AT.

Know your Carls: Thorstein VEBLEN, author of The Theory of the Leisure Class, went to Carleton College over a century before Team Fiend’s Sophia and I did. [Social scientist Thorstein who wrote, “The possession of wealth confers honour; it is an invidious distinction”].