Took me a minute to figure out what was going on because I am too old for this theme to be in my wheelhouse. The theme answers seem straightforward except that the clues are all in quotes and more than the first word starts with an uppercase letter. Hmm. 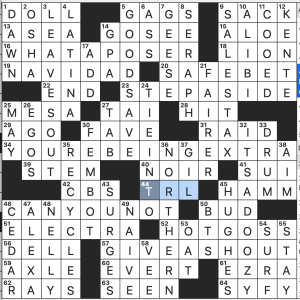 It eventually dawned on me that the clues are all Spice Girls songs. Cute! I don’t know how old Chandi is. I’m sure these are all Golden Oldies for a number of the Inkubator crew. 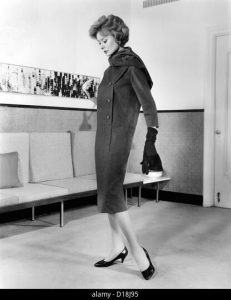 Seriously. Who looked good in this?

What I didn’t know before I did this puzzle: that ALEXA has a witty rejoinder to the question “Do you have any pets?”; that EZRA Koenig appeared in “Vampire Weekend”; that “….Baby One More Time” is the most iconic video of all time according to TRL. 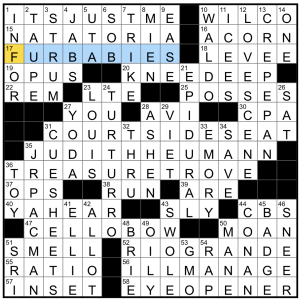 Kinda on the hard side for a Friday? The center row featured [Leading disability rights activist in the 2020 documentary “Crip Camp”], JUDITH HEUMANN, whom I’d never heard of. I’m glad to learn about her, as she sounds like a real badass!

Nice to see WILCO, which recently played three shows at Carol’s Pub in the Uptown neighborhood of Chicago, not at all the sort of place that often hosts such big-name acts.

Fave fill: “Don’t worry, IT’S JUST ME,” FUR BABIES, KNEE-DEEP, COURTSIDE SEAT, RIO GRANDE, JR. PAC-MAN, John TURTURRO (so good in Severance), LOVE SCENE, SWOLE, and EPIDURAL. Service journalism time: If you should find yourself with the worst headache ever when you are upright after receiving epidural anesthesia, tell your nurse and doctor that you might need a blood patch for the spinal headache. I found out the hard way!

Fave clue: [What might roll in the leaves], ACORN.

Theme: IT’S NOT YOU IT’S ME (53a, [Classic breakup line … and phonetically, a correction needed to understand the starred clues]). Clues to the starred answers need to have a letter U replaced with the letters ME. 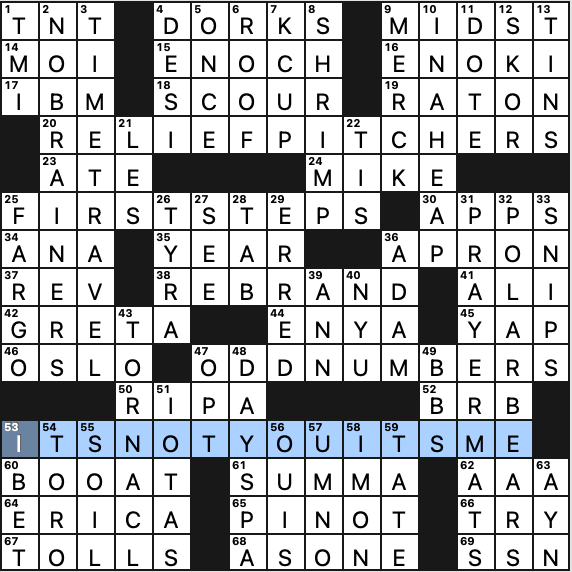 Nice theme! The clues were well-crafted so that at first you couldn’t be sure (at least I couldn’t) that something was off. It really took me getting to the final theme answer to realize that something was definitely not right. The revealer was therefore a welcome find which provided the much-needed aha moment.

Also nice are those two stacks of 10s in the NW and SE. NO BRAINER / TIME TRAVEL and PRAYER MATS / POLAR BEARS. Those are stacks almost any constructor would love to have, and to get two such stacks is a treat for solvers. I will say “boo” to BOO AT though.

Nice puzzle with a satisfying aha moment. Four stars. And congrats to new constructor Rich Katz on a nice debut! 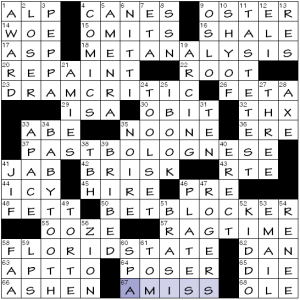 67aR [Not quite right, and an apt title for this puzzle?] AMISS. The theme is two-word phrases in which each first word has dropped its terminal letter A, for wacky results. (63a [Probably will, after “is”] APT TO. 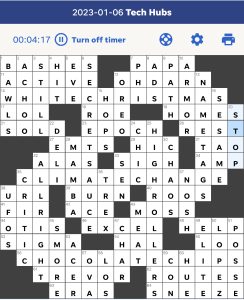 This was a great set of themers. CLIMATE CHANGE was relatively intuitive, even if you aren’t familiar with the Just Stop Oil protests themselves. CHOCOLATE CHIPS felt like a gimme with “semi-sweet” in the clue, and I loved the holiday fact about WHITE CHRISTMAS. It wasn’t until after I finished that I realized that TECH appeared in each, so it didn’t factor into my solve at all. Still, I enjoyed the theme.

I had an unusually difficult time with the NW corner of this grid, and there a few times that I felt like often-seen crossword clues like 1a [“Big parties”] BASHES or 23a [“Notable time period”] EPOCH did not refer to the usual GALAS or ERAS. It was a nice warning against settling into a routine, but I had to first get ACHOO / STILL / HIT / EVE before I realized that BASHES was the answer, delightfully crossing with 6d [“Unique quality that makes something successful”] SECRET SAUCE. The lower part of hte puzzle, on the other hand, was smooth sailing. I moved quickly through the across clues in the SW, enjoying especially the inclusion of 61a [“The ___ Project (LGBTQ youth nonprofit organization”] TREVOR. Here is also where I found the ERAS I initially thought belonged to 23a.

Other favourite fill included the hilarious 39a [“Cook way past well-done”] BURN and 52a [“Greek letter than looks like a sideways M”] SIGMA.