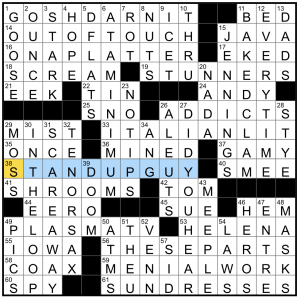 I’m watching the circus now (the one on C-SPAN), so this is distracted blogging right here.

Fave fill: “GOSHDARNIT,” OUT OF TOUCH, ON A PLATTER, a touch of Italo Calvino with ITALIAN LIT, a real STAND-UP GUY (if you’ve got HBO Max or HBO, check out Atsuko Okatsuka’s comedy special—she’s funny!), SHROOMS, ’round THESE PARTS, SUNDRESSES, IN THE LOOP, SCARE AWAY not far below SCREAM, “DID YOU HEAR?”, and Ken JENNINGS.

Two perplexing bits for me:

Overall, a fun puzzle. Four stars from me.

For reasons I am not privy to, today’s Los Angeles Times crossword is a rerun, not a new puzzle. Carry on! 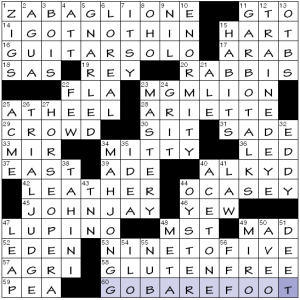 Decidedly easier than most Stumpers, including I think even the ‘Lester Ruff’-penned offerings.

No cryptic-style clue this time, nor is there a what-someone-wasn’t-called entry. But there were a few where the obscuration/difficulty dial was definitely turned way up:

All right, perhaps in retrospect not as many as I thought.

In truth, I’m somewhat relieved that it was on the easy side today. Allows me to get my day started that much sooner!

Edited to add: Anyone having trouble getting .puz files from our Today’s Puzzle page can access them at Universal and the WSJ. The Crossword Scraper extension for Chrome works on both. 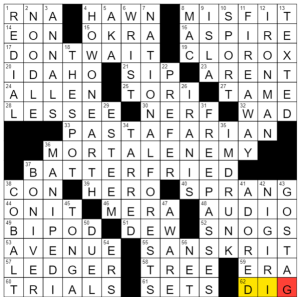 I ADORED 41D [Really loved] today’s puzzle! The center stack is fantastic, and what a lovely little easter egg to have NOODLE at 2D to accompany PASTAFARIAN. :) Enough stuff that’s a little more on the tricky side than usual with the grid spanning NATIONALFORESTS given a misdirecty clue without the ? in [They contain branches of the government] and a few things that are a little nichey, like AVENUE Q clued without much help if you aren’t familiar. In that same corner, I hesitated on BONIVER because while that was my first gut reaction, for some reason I thought they were a group rather than a single “musician”, and originally wanted MANIcure at 36D. I also like FREEPASSES clued succinctly as [Comps]. [One might be sappy] (again, without a ?) is so funny for TREE. To be clear, this is all a good thing! Just a little bit of resistance makes for a nice solve. 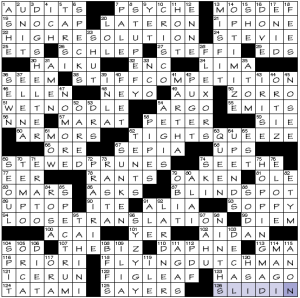 Since there are so many colorful synonyms for being intoxicated, it’s a rich furrow for crosswords. This is far from the first time we’ve seen a theme like this, nor will it be the last.

For funsies, most of these have alliterative clues—the exceptions are the first and last entries.

Quick run-through, as I have some obligations to fulfill today: 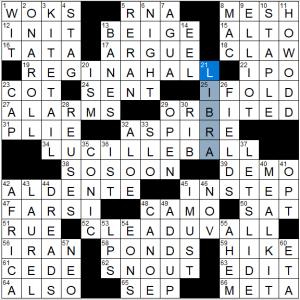 I have borked this post twice trying to get my recap in here today — thanks to whatever Fiend colleague fixed things. Short and sweet – themers are actresses whose names end in -ALL; an “all star cast”