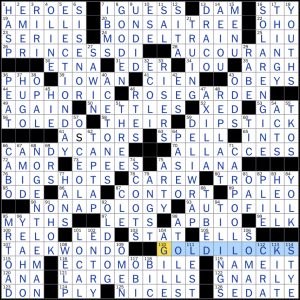 Happy weekend! I hope 2023 has treated you well so far and that you’re settling in nicely after a busy holiday season. Today’s puzzle uses fill-in-the-blank phonetic rebus clues to get us to common words or phrases, and the letters filled into those blanks promise us a bonus answer at the end. The puzzle’s flavortext notes: “Each italicized clue contains a blank, which should be filled in with a letter of the alphabet. When completed, the letters in order will spell out a two-word phrase.” Let’s dive in!

The extra letters in the italicized clues, in order, spell out SOUNDS GOOD. Sounds good to me!

Once I figured out how the themers in this puzzle worked, it wasn’t so hard to solve them, but I’ll admit to having trouble getting traction across the puzzle. It felt like there was a higher proportion of crosswordese (OHO, AEIOU, EDER, CAREW, EMER, HIE, CLE, EES) than I’ve been used to in their Sunday puzzles of late, possible because the ambitious theme made use of so many themers that had to go in a very specific, symmetrical order. Or maybe enough of the clues just weren’t on my wavelength? One big positive that I’ll give this puzzle is that I’m notoriously awful with phonetics (see any homophone clues I try to write in any of my cryptics), but the phonetics of these clues and answers felt unimpeachable to me, which is no easy feat. I also loved the clue [Path covered with diamonds] for CARPOOL LANE. Nice!

Okay, gotta run, but let us know what you thought in the comments section. Have a great week! 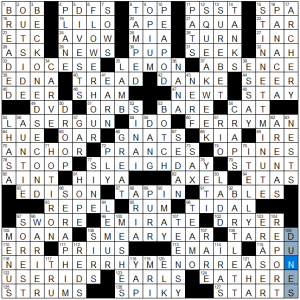 I’m going to have to come back later in the day to complete a full recap, but for now: we’ve got mirror symmetry, theme content in both down and across entries — rhyming phrases in which the last word of the phrase is a unit of time, and the revealer NEITHER RHYME NOR REASON clued to the fact that apparently nothing rhymes with “month.” Not the first time I’ve learned a word has no rhyme from a puzzle. Back later with more! 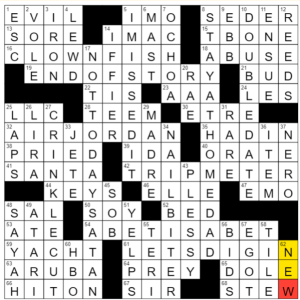 The highlights of this puzzle are certainly the 13- and 10-letter long down entries, all with spot-on cluing. But it’s also fun and fresh all over with the clues for shorter fill like SIR, PRIED, EMO, YACHT, HBO.
I say “trip-O-meter” — am I alone??
I put on NEW Romantics (62D [“___ Romantics” (Taylor Swift song)]) while writing this up.

SAL (48A [Impractical Joker Vulcano]): He is a member of comedy troupe The Tenderloins. They star in the television series Impractical Jokers, which first aired on December 15, 2011, on TruTV.

Thanks Adrian and Rafa! 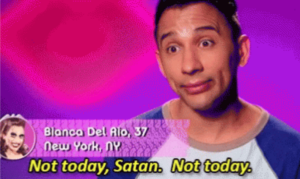 Theme: The letters in the word WORD are found in familiar phrases (not necessarily in that order), but two of the letters must be taken from the entry either above or below. 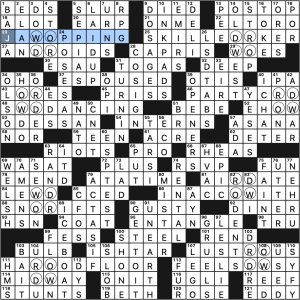 This was nicely done. It didn’t take long to get the gist of what was going on, but since there’s a good variety of phrases and since the order of the letters isn’t the same in each case, it holds the solver’s interest all the way to the end. The title makes a good basis for the theme, and even though the letters aren’t technically in a circle, the act of dipping down or popping up to get those extra letters makes it feel a little bit like they are.

The one thing that threw me was having to go up to get the needed letters in the fourth entry after having gone down in the first three. It took me an extra beat to realize that LOW-DRES wasn’t a thing and that the theme answer was the one below it (marked with an asterisk, duh). In the end, since there are four entries that go up and four that go down, the theme felt nicely balanced even though it didn’t seem that way at the start.

Fill isn’t especially sparkly, probably due to the fact there are eight theme entries with additional constraints on the words above or below each one. But it’s plenty solid and there are some standouts like OLD WEST, “GET TO IT!,” ICE BOAT, ANDROIDS, and LUSTROUS.

Theme: Each theme answer spells out RATE downward in between two words. 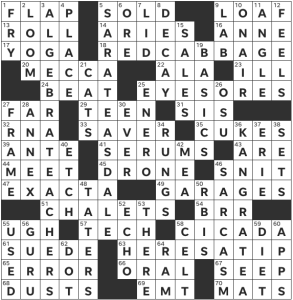 I love the variety in these three themers, particularly the pun in ALGEBRA TEACHER, which also paired well with 19d [“Intro-level material”] BASICS. I also admire the specificity of SARA TEASDALE, whose poems you can find here. Living in St. Louis (and being obsessed with local history), her name is impossible to miss, so this was a fun bonus for me. I was unfamiliar with KANGRA TEA, so I caught that almost all on the crosses, save for the TEA at the end.

I really enjoyed this puzzle. Not thinking of LOAF immediately for 9d [“Amount of ciabatta”] and my unawareness of 16a [“Photographer Geddes”] ANNE, the NE corner came more slowly for me. RED CABBAGE, EYE SORES, and HERE’S A TIP made for a solid fill as well. It was nice to get these longer answers in addition to the three different-sized themers themselves.