Theme: ACDC – Each theme answer contains the strings “AC’ and “DC” in that order. 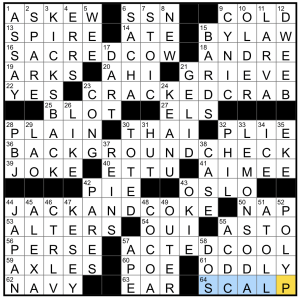 Whenever I solve a puzzle by Andrea and Kevin I know that I’m going to be in for a solid theme and clean gridwork, and today was no exception. The ACDC theme is elevated by how the AC appears before the DC in every answer – it’s also interesting that the DC bridges the two words in each theme entry; I wonder how much of that was by choice versus necessity?

I hadn’t heard of this use of SACRED COW, and I hadn’t heard of CRACKED CRAB in any context, so the first two answers were tricky for me. Luckily, things sped along with the last three answers and the revealer. BACKGROUND CHECK is a fun grid spanning answer.

KICKS BACK and its multitude of K’s was fun to uncover early in the puzzle. LEMON SODA, on the other side, was also nice, but the clue of [San Pellegrino offering] made me think it was going to be the branded drink “Limonata”, which did not fit. But other than the KESEY/CTRL-V area, the grid is very Monday-friendly given the amount of theme material. 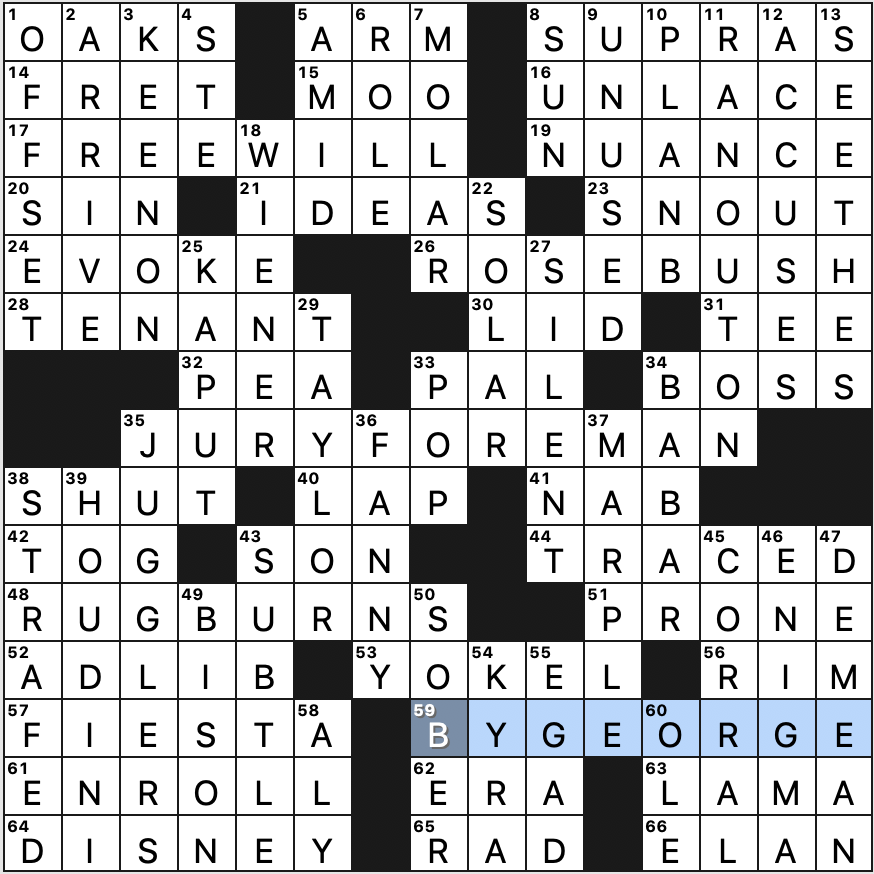 I’m pretty sure the revealer clue means the ends and not the starts of the other theme answers. Because then we get George Will, George Bush, George Foreman, and George Burns (as opposed to George Free, George Rose, George Jury, and George Rug). I’m not sure how a puzzle gets all the way through the publication process with such a glaring error in the theme of all places, but here we are.

This is a pretty unusual construction with mostly 8-letter theme answers (including the revealer) and a central 11-letter entry. I wasn’t sure where to find the theme at first and wondered if it might be in the Down entries. So I was thankful for the revealer to sort things out for me (despite the mistake therein).

By the way, the puzzle title is the end of the quote from My Fair Lady where Higgins exclaims, “By George, she’s got it!” I found it interesting that in the film at least, he doesn’t actually say, “By George, I think she’s got it!”

I’m impressed with those NE/SW large corners, especially the SW with JUGGLERS, HOUDINI, and BISON crossing FIESTA and DISNEY. Elsewhere I enjoyed seeing Miss MARPLE, a WIENER (at a campfire!), KAPUT, ENIGMA, SUBTLE, and NUANCE.

Interesting puzzle with an unusual construction, nice fill, and more challenging cluing than the usual Monday. The theme works just fine, once you suss out the error. 3.75 stars.

Edited to add: In the comments below, Martin provided an alternative (and the correct) interpretation of the revealer.  The first words in each theme answer are indeed BY GEORGE where Will, Bush, etc. are the Georges in question. While I get it now, I don’t like it, since the revealer normally targets the keywords in question. Further, those second words in each phrase are regular English-language words (i.e. not names) until they are placed “by George,” thereby becoming proper names. 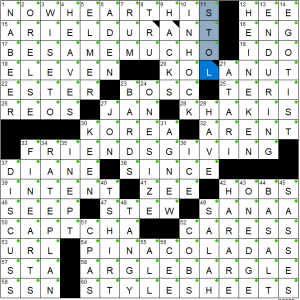 One of the tougher BEQs in some time for me today – a joy to puzzle through. I loved the stacks in the NW and SE – ARIEL DURANT, BESAME MUCHO, ARGLE BARGLE, STYLESHEETS, and while the SE corner was easier than the upper-left, I really had to work outward from FRIENDSGIVING [Late November pot luck dinner, say].

I’m not sure I’ve landed on the right way to articulate this, but Brendan’s themelesses sometimes have “I guess that’s a word” words — this one is pretty clean by comparison, and that it was nice and tough all the same is a plus for me. I suppose NA BEER [1d Drink for those abstaining] is on the edge — it certainly doesn’t look nice in a grid — but it’s a thing (the NA is Non-Alcoholic, btw). 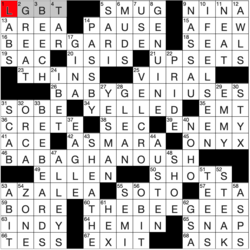 Los Angeles Times 1/9/23 by Lynn K. Watson and Will Nediger

Little time to write this one up, so I’ll make a general comment that it was slightly stickier than the average Monday (on Monday, a ten-or-so-second difference is significant!). The theme is pretty straightforward, though. The revealer at 60A [Rock and Roll Hall of Fame trio, and an apt name for a trio of answers in this puzzle] is THE BEE GEES, and in fact the three theme entries are two-word phrases with the initials BG. 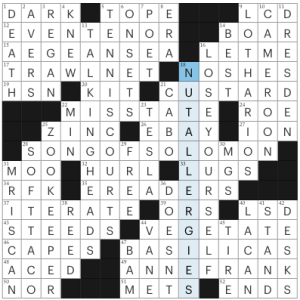 Lots of nice stuff here in a puzzle that struck me as easier than most Monday TNYs (right in the Sat NYT vein).

Have any of you ever used the word TOPE outside of crosswords or ironic discourse among crossworders? I learned the word from crosswords decades ago and that’s still the only place I encounter it.