This week we’re looking for a three-word phrase you might say when having an epiphany. I spotted most of the theme pretty quickly: the long across entries contained “AHA.” I initially missed the fact that the first and last horizontal entries also contained AHAs, which delayed my solve a bit. Here are the six theme entries: 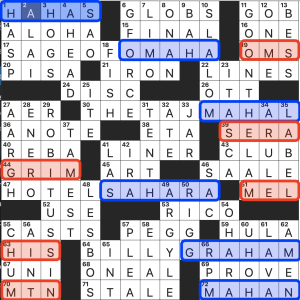 Step two: focus on each AHA-containing word and then remove the AHA. Then map back to the grid. For example: HAHAS minus AHA becomes HS, which maps to 63a (HIS):

The spare  letters in the mapped entries spell I SEE IT, our contest solution. After solving I discussed this meta with a friend who mentioned 28d (ENERO, clued as “When Epifanía is celebrated”). Epifanía is the Spanish word for Epiphany, which certainly seems thematic. I (thankfully) missed this when I solved the grid and found the theme, but I could see a lot of solvers delving deeply in that rabbit hole. It seems like a red herring to me, but I certainly could be missing something. Readers: let me know what you think, and please share your solving epiphanies.