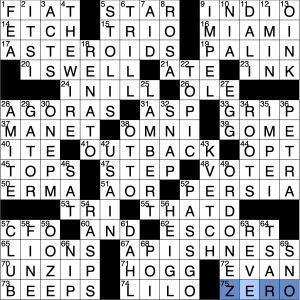 hello and welcome to episode #763 of matt gaffney’s weekly crossword contest, “Not for Nothing”. i solved this crossword in a post-mystery hunt haze, and i have almost no memory of doing so (nor did i remember to time my solve). so i just solved it again, and … well, i’m actually no closer to solving the meta. but let’s go through it and see what happens. the instructions tell us that This week’s contest answer, which is 7 letters long, is what I hope you’ll find this meta to be. all right. what are the theme answers?

there are no long entries in the grid (a couple of 9s), but the last across answer is interest in light of the puzzle’s title: {Numeral that resembles a letter} ZERO. it resembles a capital O, of which there are 18 in the grid. that’s not an unusually high or low number, nor is it particular noteworthy in light of the fact that we’re looking for a 7-letter answer.

what else is there? {Painter of Paris cafés} MANET certainly caught my attention, as the very similar MONET could fit the same clue with an O instead of an A, and the ZERO clue has told us to be on the lookout for O’s. the weird partial {___ health (sick)} IN ILL contains a hidden NIL, which is synonymous with zero; likewise {Open, as a suitcase} UNZIP contains ZIP and, hmm, i actually thought there’d be more, maybe NONE or NADA or ZILCH. i guess there’s {Poachable food} EGG, although not a goose EGG. ZIP isn’t especially well hidden in UNZIP.

might we replace the ZERO synonyms with the letter O? doing so gives IN ILL -> IOL, which is nonsense; UNZIP -> UNO is at least something, but not something in this puzzle.

maybe “not for nothing” means we’re supposed to ignore the O’s entirely. i can see that doing so would turn OINK at 13d into INK, another grid entry (at 23a); and TRIO at 15a into TRI (53a). but most of the O’s aren’t like this.

what about the numeral 0 itself? there are seven clue numbers with a zero, so that’s interesting in light of the instructions. they are:

okay, so even though there are seven of these, i’m thinking this isn’t it.

back to the O’s in the grid. maybe we’re supposed to substitute one of the various words meaning ZERO (or perhaps the word “not” itself, as hinted by the title) for an O and get something intelligible out of it? one reason i’d like to do this is that i don’t see any other reason 9a {City near Palm Springs} INDIO is in the grid. i’ve never heard of that city. then again, there’s another entry i’ve never heard of at 1d {“Yo soy Betty, la ___” (Colombian show that an American show was based on)} FEA either, and that section of the grid doesn’t even have any O’s.

having said all that, i don’t see anything promising happening along these lines. so, after all that, aptly enough i suppose, i’ve got nothing. i have to throw in the towel. i suppose i can make a wild guess like NO SWEAT and hope it’s right.