Now this is how you use circles to good effect in a puzzle theme! Each theme answer is a familiar two-word phrase, but the first word is found embedded in the second word and is identified by circles. 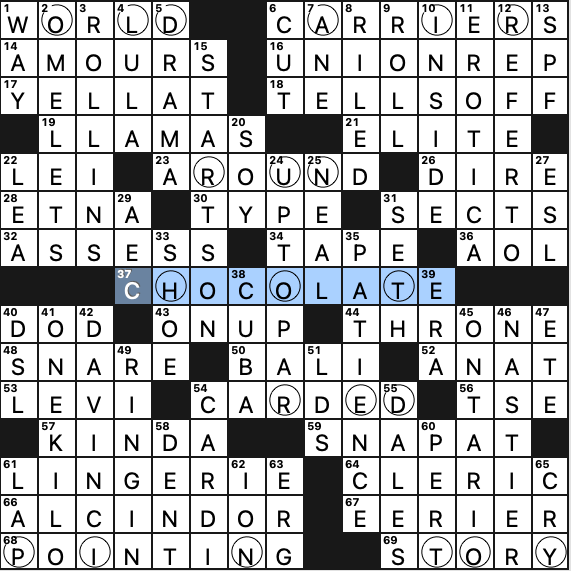 What a nifty theme! I don’t think I’ve seen it before, and it was a lot of fun sussing it out and having that aha moment (which came with the second entry for me). How did it play out for you?

The fill is plenty solid as well with UNION REP, LINGERIE, EROTICA, UP TO PAR, and DAVINCI as the highlights. I also love TELLS OFF which I think is more of a Britishism than an Americanism. But we picked it up in our family and used it when our kids were younger. (Thankfully, they don’t need to get told off much anymore.)

I will say that SW corner was tough with proper names crossing DAVINCI at critical points. I stared at DA_IN_I for quite some time before I realized I needed LEVI and ALCINDOR. I didn’t know LEVI Stubbs, and I’d never heard Abdul-Jabbar’s given name (full birth name: Ferdinand Lewis Alcindor), so I didn’t know if we were looking just at the surname or if “Al” was his first name. And with DAVINCI clued obliquely with [Code name?], I couldn’t see it for a long time. But I had another aha moment and finished the grid with that entry, so no harm no foul. 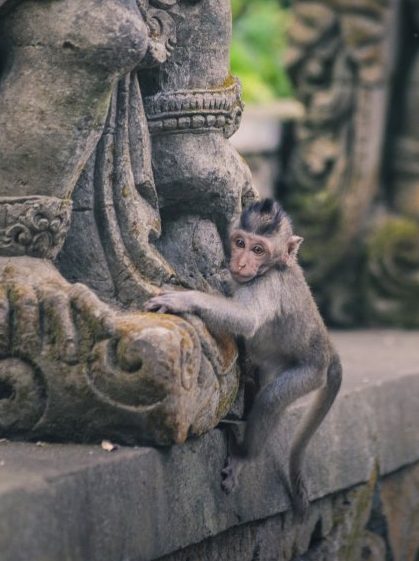 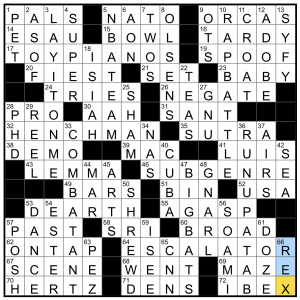 Today’s theme: RUN UP A TAB (Accumulate charges … or what you must do to answer four clues in this puzzle)

Already had BABY in the top right corner when I hit the Eartha Kitt clue, so it was easy to see SANTA BABY proceeding right, up, and right again, like some little tetromino looking for a home.  The other TABs weren’t hard to find.  This is the third time I’m encountering PASTA BAR in a NYT puzzle, and it’s still an awkward entry to me.  I’ve seen all-you-can-eat buffets that included pasta dishes, but never one solely devoted to the semolinac arts.  In any event, it was a pretty breezy puzzle.  Lots to like in the fill, from BIG BATS to LAY IT ON ME to RAP BATTLE.

Cracking: OTS — Penn State bonus points from a Nittany Lion booster.  Mostly for the mention, although as I recall, heavily favored PSU was unseated by the Illini in that game, so maybe I hate the entry after all.

Slacking: LEMMA — another word that looks like it wants to be LEMME, or COMMA, or anything else aside from this bit of mathematical jargon that always feels made-up to me (yes, all words are “made up”).  [EDIT:  I am giving LEMMA a reprieve, courtesy of Schwartzman’s “The Words of Mathematics”, which describes LEMMA thusly:

from the Greek verb lambanein, “to grasp, to take.”  The Indo-European root is (s)lag – to seize.  An English cognate is latch.  From Greek comes epilepsy, with its seizures.  In mathematics a lemma is a theorem that you “grasp hold of” when you proceed to prove another theorem that is usually more complicated or more important.

Honorable mention to AON Flux, which is I guess what you call the state of being in between insurance carriers?

Sidetracking: Two things immediately jump to mind when I think of PEZ; the first is that you, too, can drive to Orange, CT and take the family on a PEZ factory tour; the second is Seinfeld, season 3, episode 14.  Those things are hard to load.

Sometimes I try to figure out the theme from the title. I guessed military lingo. I was wrong.

Each theme answer substitutes the general category for one word in a phrase. It’s easier to show than it is to tell. 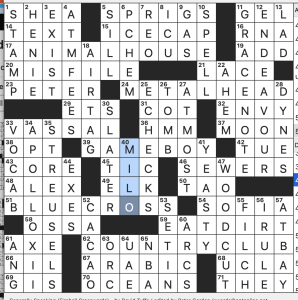 What I didn’t know before I did this puzzle: that MILO is the protagonist of “Atlantis: The Lost Empire.” He must have wandered over from “The Phantom Tollbooth.” 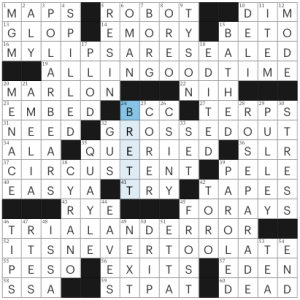 As usual, Robyn hits the target with easy clues for the “beginner-friendly” Thursday New Yorker offering. She also packs the grid with lively longer fill. Among the highlights for me: MY LIPS ARE SEALED, ALL IN GOOD TIME, GROSSED OUT, IT’S NEVER TOO LATE (except when it is; the upbeat clue here is [“Remember, Grandma Moses didn’t start painting until she was in her seventies!”]), POLAR BEARS, CYRANO, and the ROSE PARADE.

I never saw at least a quarter of the clues, since plowing through the Acrosses with easy clues means not needing to check the Down crossings.

Theme: Movies with numbers in their titles, but the numbers are represented by the clue numbers. 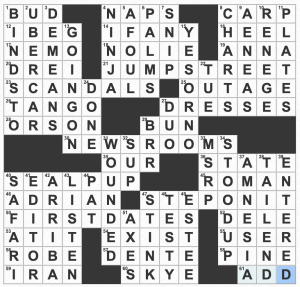 My first thought when I saw this puzzle was, “well, that’s an odd black square formation”. Once I saw the theme, though, I understood why it was there. It is very hard, construction-wise, to make a puzzle where certain words need to be at certain clue numbers. And it’s even harder when one of them, 13 Going On 30, needs to be at two numbers! So I was very impressed by the puzzle’s construction, and as a movie fan myself, I liked the theme a lot. The titles chosen felt like an ode to the mid-budget romcom, which I am very much here for.

Side note: I solved this puzzle on the Andrews McMeel site, which got, uh, a little confused about the title/author concept. Shoutout to Daily Crossword Links for actually providing Joseph’s name!

Favorite answers: YES OR NO, STEP ON IT, SEAL PUP

Favorite clues: 51d [Good fellers?] for AXES, 36a [Washington, but not Lincoln] for STATE. 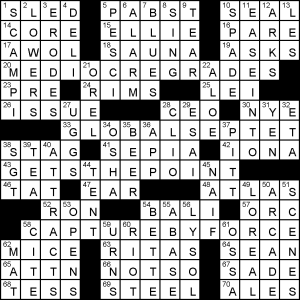 The grid itself, possibly because of the theme type forcing four longish themers, is quite conservative There are a few answers with different clue angles though. I don’t remember seeing NYE clued as [Dec. 31]  before. [Comfort Revolution bra-maker], BALI also seems a different angle, possibly riding a Renaissance of popularity? I’ve also not seen [The Panthers of the ACC], PITT clued as an abbr. of Pittsburgh.

What a fun puzzle! An awesome grid, great theme and themer set, plus loads of delightful bonus fill. 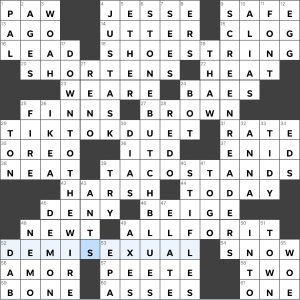 Theme: the word TOUCH can be added before (or above) the first word of each down themer

STONEBUTCHBLUES is from 1993 and has a 20th anniversary edition out now. SCREENREADERS are crucial for many and I have been learning about them more as the topic of digital accessibility becomes key to creating websites and electronic/online documents. DOWNTOTHEWIRE is not an excellent phrase that I’ve seen in a crossword before and not one that you want to hear when cheering on your favorite NFL team. With the theme, that gives us: TOUCH STONE, TOUCH SCREEN, and TOUCH DOWN.

Stumpers: UTTER (kept thinking of “speak”), BEIGE (needed crossings, just didn’t come to mind as I don’t hear it used as much anymore), and PEETE (new to me)

I still can’t believe how much lengthy bonus fill fit into this puzzle along with that themer set. What a feat! More collabs from this dynamic duo please!

Theme: Each theme answer is something that you could buy at a shop that contains a body part found on the head. 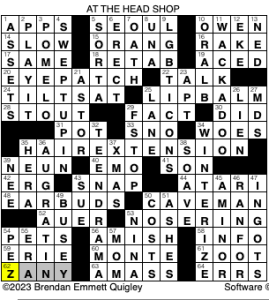 An impressive set of five themers out in this grid! It was easy to pick up the theme answers here, and I enjoyed the uniformity of the cluing as a result. All of these fell into place rather quickly.

For some reason, I feel like ORAL B often pops up in BEQ puzzles, so practice made that easy to pick up on, even though I initially struggled with the NW corner. I had PEEL instead of RAKE for 16a [“Thing stepped on for comic effect”], don’t watch enough Simpsons to get NED, and wasn’t sure about WACKADOO. However, eventually EKE and ORAL B saved the day there. I enjoyed 9d [“Harvey Milk and Billie Jean King, for two”] LGBT ICONS, as well as 4d [“Completely involved with”]. However, I was a bit confused by ORANG as 15a [“Zoo attraction”]; I just felt I needed the abbreviation hint. Bonus fun fill that I loved included ZOOT and ZANY.

Sorry for the late post! It’s been a crazy day. Still, a fun puzzle!