Inkubator themelesses are always fun and this one is no exception. I agree with the team’s ranking of this as lightly challenging. 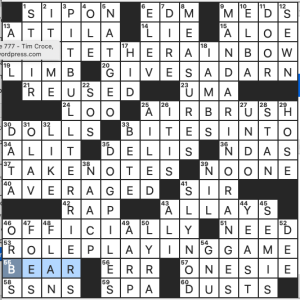 What I didn’t know before I did this puzzle: I am delighted to learn about Fat BEAR Week at Katmai National Park. There’s a bracket! 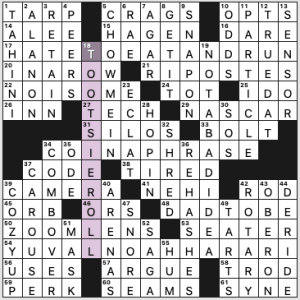 Been a while since I dipped below the 4-minute mark on a Fri NYT, I think. The Thursday New Yorker themelesses are still easier than an easy Fri NYT. This 68-worder might be the constructor’s debut

Did not know: 54a. [Best-selling Israeli author of “Sapiens: A Brief History of Humankind”, YUVAL NOAH HARARI.  Did not even know that Yuval was a (Hebrew?) name, but the crossings gave me all the letters. Here’s his Wikipedia page. He’s published a couple other popular-science sort of books. 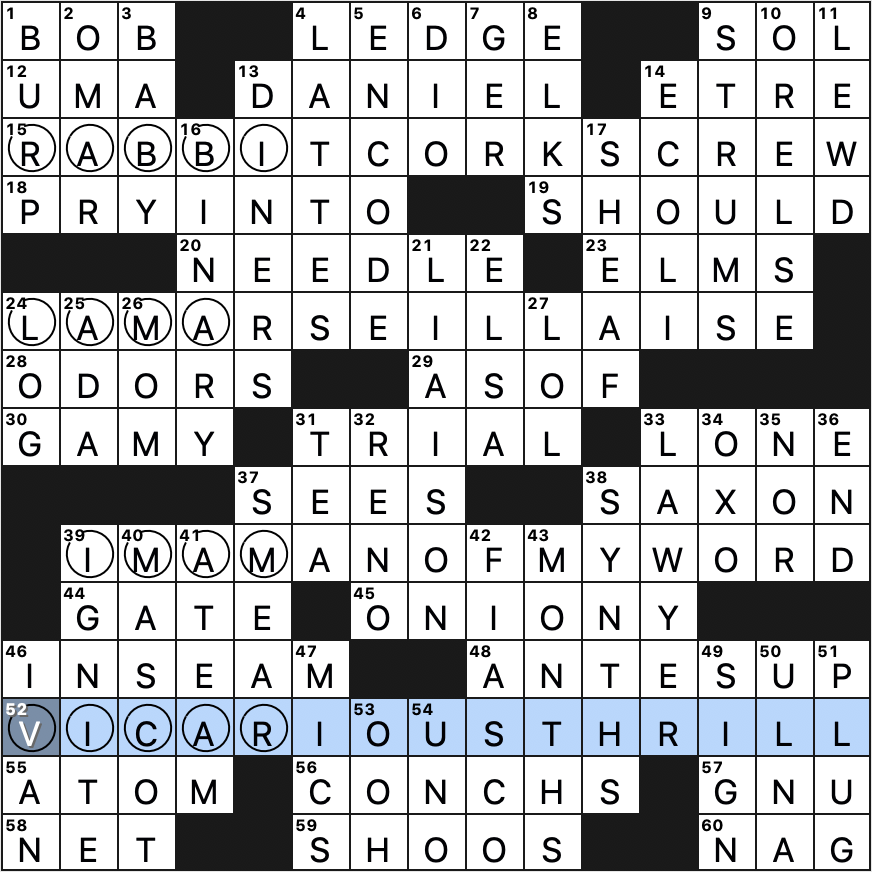 Nice. I especially like that each leader is from a different religion: Judaism, Buddhism, Islam, Christianity. The theme is pretty straightforward, so this is a nice touch.

The theme answers are long, as theme answers go, but there are only four of them, so I would’ve hoped to see some lively long fill. We get LIAISON, ANTES UP, and PRY INTO, but that’s about it. There’s nothing especially thorny, though, except maybe ETRE.

Not a lot to say about this puzzle, actually. The theme works and is nice enough, there’s just not a lot of sparkle beyond it. 3.25 stars. 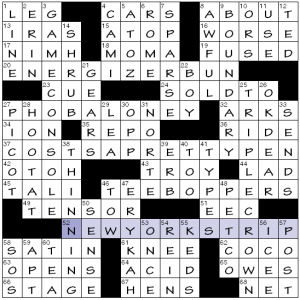 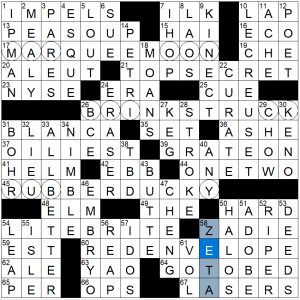 Circled letters highlight our theme — broken-up shades of red fill constitute the beginning and end of three themers, and our revealer, appropriate for Lunar New Year celebrations this weekend, is RED ENVELOPE [Traditional Lunar New Year gift … and a feature of three answers in this puzzle].

Themers are nicely evocative: noteworthy punk album MARQUEE MOON (“MAROON”), which, off the cuff, maybe I learned from a BEQ puzzle once upon a time; BRINKS TRUCK (“BRICK”), and RUBBER DUCKY (“RUBY”). Other highlights for me were the parenting-lensed ALL BETTER and GO TO BED, and YAO Ming, who really is a global icon for reasons beyond his Hall-of-Fame stats. I could do without the quasi-partial ESQUE [Suffix akin to -ish], but recognize the constraints in that corner, or wherever the -Q- of MARQUEE MOON was going to end up. 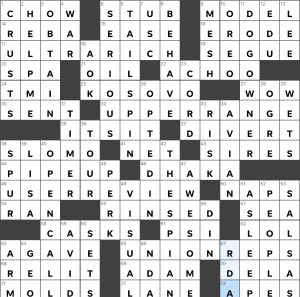 Enrique Henestroza Anguiano’s USA Today crossword, “All the Things You Are” solution for 1/20/2023

Under five minutes in this puzzle makes for a quicker-than-average solve for me. I thought it was a fun puzzle, really easy to move through, especially with the theme so apparent. As a concept, it was a nice play on the homophonic sounds of YOU and ARE in the puzzle’s title. I got a jumpstart on ULTRA RICH from CRUSTS, and I cruised through UPPER RANGE and USER REVIEW pretty easily. I didn’t think of shortening REPS at first in the final themer, but I plugged in UNION and let the crosses at ASLEEP, PEOPLE, and SALSAS do the rest of the work for me.

My personal natick on this one – and I think it’s a me-thing more than a puzzle-thing – was the cross at 57d [“Dentist’s co-worker, for short”] RDA and 70a [“Drag queen Ben ___ Creme”] DE LA. In retrospect, I should’ve inferred this, butI went through the alphabet until I got the congratulatory message. Speaking of crosses, I found a fun one where ALSEEP met NAPS.

There were not a lot of proper names in the grid itself, which I think helped my solve time. Answer-wise, it was really just 46a [“Capital of Bangladesh”] DHAKA, Ben DE LA Creme, and 69a [“First man in the Bible”] ADAM.