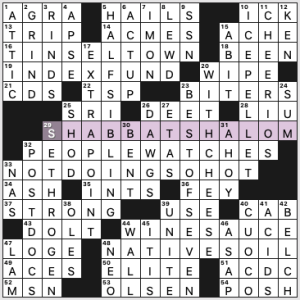 After that themed Friday the 13th puzzle deprived us of our expected themeless, now we’re getting Friday themelesses in place of Saturday ones. Bring us a tough Saturday puzzle!

Fave fill: old-timey TINSELTOWN, “SHABBAT SHALOM” (thank you for making that one super-easy, Jenni!), PEOPLE-WATCHES, NOT DOING SO HOT, WINE SAUCE, POSTDOCS, SETH ROGEN, EXTRA POINT in football (I wanted an END ZONE DANCE here), BEST OF SEVEN playoffs (the Grim Reaper in one of the Bill & Ted movies kept losing to the teens and changing the targets—I think he maxed out at “Best five out of nine?”), and my fave CHEERIOS (have not used them as GF bread crumbs).

Wasn’t wild about plurals like OLES ETAS CDS INTS as entries, but none was challenging. The 1a/4d AGRA/APSE crossing had a bit of a crosswordese vibe. Lots of crisp long fill to offset the shorter drawbacks, though. 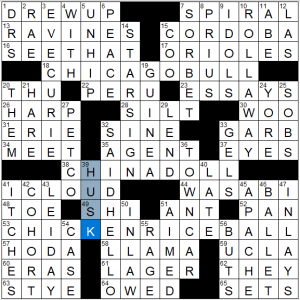 Themers are bracketed by the letters of the word “CHILL”: 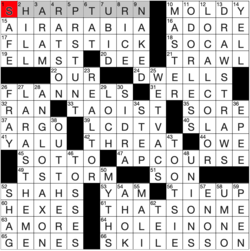 WOW, OKAY. So I’ve been saying about quite a few LAT Saturdays lately that they’re a bit easier than I like. Well, this one was harder than some Saturday Stumpers, at least for me! (I also spent longer on this one than on both of this week’s NYT themelesses put together.)

About two-thirds of the way through my solve, I finally looked at the byline in the spirit of “WHO’S DOING THIS TO ME?!” and should not have been the least surprised to see Rich Norris’s name there. Between references to football (8D RICE) and golf (17A FLAT STICK and 64A HOLE IN ONE, although I would say only the former requires actual familiarity with golf), and geography (18A SOCAL, 41A YALU, 55D MALI), the knowledge base in this puzzle certainly did not hit my strong points, and some very tough cluing on entries like ELM ST, TAOIST, ARGO, SKI LESSON, TAT, ODORLESS (I was a chem major, and helium has lots of other qualities I think of before I think of odorlessness!), WET VAC, ANGLO-SAXON…

This is all to say: Challenges are good. If you found this one markedly harder than most, you’re not alone.

Paul Coulter’s Wall Street Journal crossword, “When the Chips are Down” — pannonica’s write-up 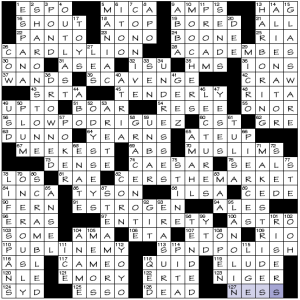 This one has a clever theme, but needs the title for its raison. For each of the starred across entries, there is a segment that extends downward, and that word can precede ‘chip’.

Where possible, the down clues have been clued as something other than the chip context. This was not possible for PITA and MICRO. It’s a good theme and, as can be seen, a tough one to pull off flawlessly.

I noticed a fair amount of fill that is uncommon in crosswords, including the Britishy 22a [Brit’s Christmas theatre show] PANTO, 118a [Pound sterling, informally] QUID, 7d [Plot] CONNIVE. Also, there were some inflected forms of words that, by their length, would naturally be rarely seen in grids: ALIENATOR, ONEROUSLY, TENDERLY, and the like. (14d, 79d, 45a) 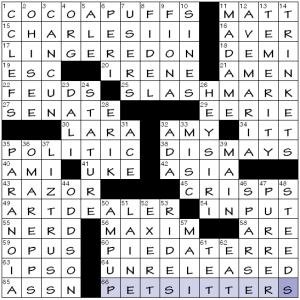 Another one that turned out to be easier than the norm.

Biggest issue was falling into the trap at 11-across: [Son of Marge and Homer] was not BART, but MATT Groening and those are the names of his real-life parents. As it was just a four-letter entry, it wasn’t much of a hindrance to the overall solve.

A little tougher next time, please?