Hi all! Quick write-up today, as the weekend is never enough time to do everything the workweek won’t allow. I hope you’re all well! 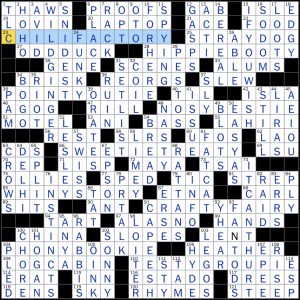 – 23A: CHILI FACTORY [Kitchen at a barbecue restaurant?] – Chill factor

– 85A: WHINY STORY [Long anecdote from a complainer?] – Wine store

Each themer is a base phrase with the “E” sound added to the end of each word. My favorite was perhaps the first one, CHILI FACTORY (especially since it crossed TLC, who’s C member was named Chilli). I would have wanted a bit more of a transformation in some of the themers between the base phrase and themer, but the puzzle is overall quite impressive for a constructor who is still in high school. Bravo, indeed!

New to me: FANTODS [State of uneasiness, informally] at 93D. I had to look that one up after staring at it for a while trying to make sense of it!

Ok, off for now. Let us know what you thought in the comments section – and have a great Sunday! 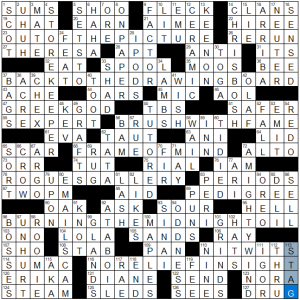 Evan’s email to me providing the puzzle this week said only “He’s back.” I’m a fan of Evan’s Captain Obvious themes, which repurpose common phrases with Merl Reagle-esque charm. It’s a nice change of pace from wordplay themes.

A pleasant trip through the grid — the center area is a little kludgier with short stuff as the middle three themers are only separated by a single row, so we find more open areas in the corners. EMAIL SCAM, SEXPERT, and A MIGHTY WIND are particular highlights in the fill.

Theme answers are familiar phrases with circled letters that are anagrams of well-known games. 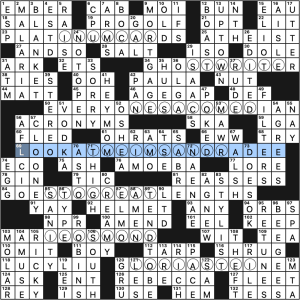 Some very impressive anagrams here. That said, when an anagram gets to be 8, 9, or 10 letters long, chances are I’m not going to recognize it. Thus, the theme was of limited help in actually filling out the grid. Fun theme answers, though.

I also like the variety of games with some being traditional, some being newer, some party games, and some board games.

The fill is strong with highlights “HEY MOM!,” “OH RATS!,” LUCY LIU, and the BEE GEES. 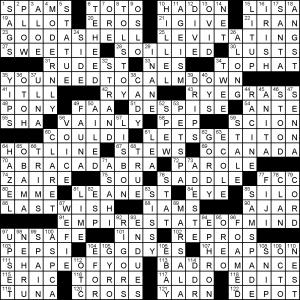 Alan Massengill & Doug Peterson’s puzzle, “Play It Again” is really clever! It features pairs of song titles, one in the clue, one in the answer, that are synonymous. So:

Theme: The first word of every theme answer can precede RABBIT. 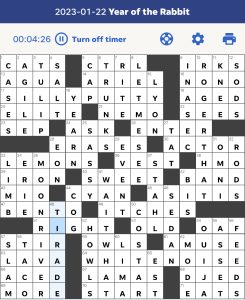 Obviously appropriate for the beginning of the Year of the Rabbit today, this puzzle was really fun. I love the combination of Across and Down answers here. It was really easy to discern the theme once I filled in SILLY PUTTY, but it didn’t change much about my solve. I needed crosses to get MOON RIVER, but the others fell into place pretty quickly. I really like ROGER THAT, but the fun “oh!” I had on SILLY PUTTY was my favourite part of the puzzle.

The downside to doing a combo of Across and Down themers here was my confusion with 41d [“‘Hold on…you’re serious?!’”] WAIT WHAT, which, only one letter shorter than MOON RIVER, almost felt like it should fit in. However, it was also clearly not a rule of rabbit.

Otherwise, I had a pretty smooth solve. I love that we’re never going to let 14a [“Disney princess who combs her hair with a fork”] ARIEL live it down. I also really enjoyed LET ME SEE and IN A SEC. The middle of the grid made me hungry, with its LEMONS, 40a [“Like tong sui”] SWEET, and 47a [“Kyaraben, for example”] BENTO. It also enjoyed where FEEDS and EATS crossed in the SE corner.