Theme: The last word of each theme answer is also a type of instrument that you blow into. 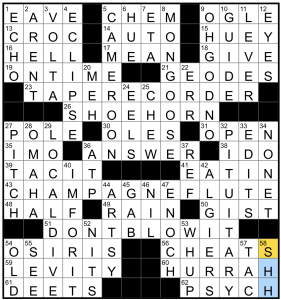 This was a cute theme, and I liked how completely the meanings of the instruments were changed. Also impressive is how TAPE RECORDER and SHOEHORN are stacked on top of each other, that can be tricky to do. This puzzle is a little smaller than usual (14×15), which allows for mirror-symmetry to accommodate the different lengths of the theme set. It’s a great use of construction tricks to make a specific theme really work. The only thing I didn’t love was the wording of the revealer – why a musician specifically? I get that they’re all instruments, but no one should be blowing any of these.

Hardest part of the puzzle for me: the southeast corner, where I had “hoorah” instead of HURRAH, and I didn’t know ENOCH or ALGIERS.

Favorite answers: LOCAL DIVE, I’M FOR IT, CAMEROON, MONGOOSE (I knew the mongoose answer immediately, I’m not sure how it will play for other folks).

Circled letters spell out words that can precede “card,” with said words “cut” by a block. 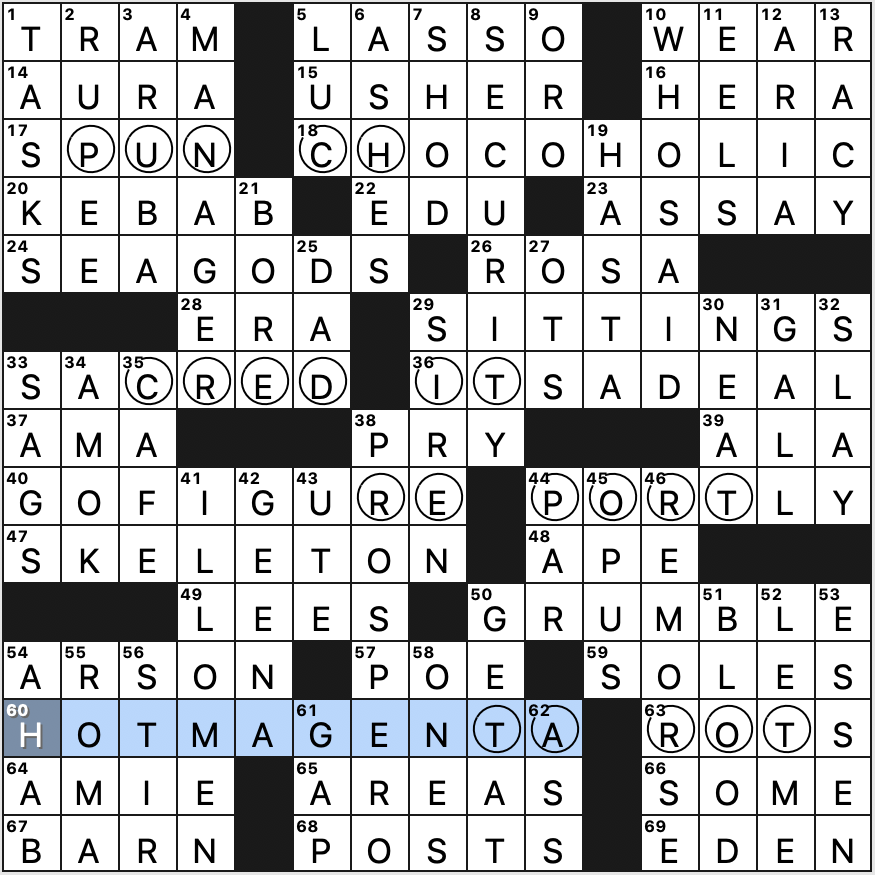 There’s no wordplay in a theme like this so it relies on lively theme entries to keep things interesting. The shorter portions are there to get the job done, but the longer portions are all enjoyable. A fine Monday theme.

Elsewhere we have “WHO SAID?,” SKELETON, PROSPERO, ILL OMEN, GRUMBLE, and SECURITY adding some sparkle to the fill. 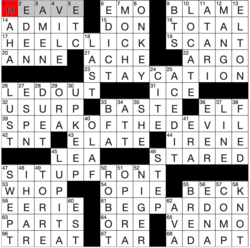 Woof! The only hard part about this puzzle, at least for me, was parsing the theme afterward. The grid fell into place almost entirely without my needing to use any Across clues, and the revealer doesn’t exactly jump out at you, since it’s only five letters long and isn’t the last Across or Down answer. All is revealed at 66A [Reward for a pup who obeys the commands at the starts of 17-, 23-, 39-, 47-, and 61-Across], sort of. The answer is TREAT, and “obeying the commands” tells you that the first word (or first part of a compound word, in the case of 23A) in each theme phrase is a command that a dog might learn at obedience school:

Nothing tough in the grid (well, with the possible exception of Joe TORRE at 49D), leading to a very easy solve that hopefully leaves you time to check out this appropriate and adorbz Instagram account. 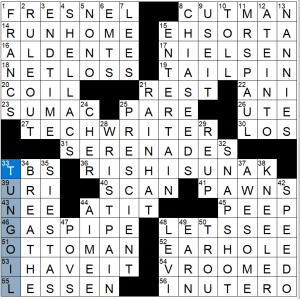 I’m interested how people found this one — there were a number of entries that didn’t make sense until I had most of the crossings, but it was also pretty approachable to keep a steady pace. I have to say I didn’t find the grid all that appealing at the outset, but interlocking stairstacks always seem to pay off.

As someone who thinks a lot about his progression through the grid, I’m a fan of themelesses that are a touch tougher in the NW corner, and at 1A in particular. It’s a common cluing approach in tournament finals puzzles, and we get a taste of that here, with FRESNEL, a word I’ve seen but certainly not often. And yet, once COIL [Mattress part] and SUMAC [Poisonous plant] got in there, the downs aren’t too bad and the corner fills out. A deft and pleasant set up for the solver.

The intersecting stairstacks are a delight: PRESCIENT, RAINHAT, ENTERTAIN, TECHWRITER, SERENADES, RISHI SUNAK, and hell, let’s add CHIA SEEDS and WRIST PAIN in there, too. General enough that BEQ could get a bit cuter with the clues for TECH WRITER [One working on manual transmissions?] and RISHI SUNAK [He gained confidence after a Truss fall].

Plenty to say about entries all over this grid, but I’ll limit myself to TUNG OIL: totally new to me, Googles super well, definitely A Thing. Today I Learned! 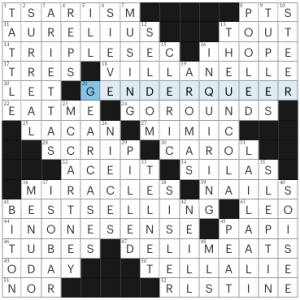 I always enjoy a Natan New Yorker themeless, but this one took a weird path to completion. I wasn’t seeing any gimmes in the top half of the puzzle and finally made way in the lower left quadrant. It still came together in about as long as a Mon TNY usually takes me, somehow. It felt a lot slower!

Fave fill: TRIPLE SEC, GENDERQUEER (tried to get GENDER-FLUID to work), GO-ROUNDS, Smokey Robinson and the MIRACLES (video below), R.L. STINE (a gimme nowhere near the top of the grid), MCCARTNEY, -PILLED (as in red-pilled), THE UNCOLA, LAILA ALI, and SLEPT IN.

Four stars from me. Perhaps a bit less punchy than most of Natan’s puzzles, with the dryness of TSARISM leading the way at 1a.