Hey everyone, this will be an abbreviated writeup because I just landed in California, got to my hotel in Berkeley, and realize I am 3 hours behind the east coast. The center entry (CHINA, clued as “Nation with a 12-animal zodiac”) was the key: there were twelve Chinese zodiac animal-themed clues: 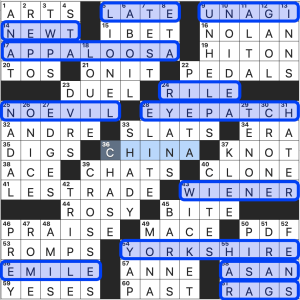 The animal-themed entries spell LUNAR NEW YEAR, our contest solution. I was impressed that Mike put the zodiac animals in order. And happy lunar new year!