Matt Jones’s Jonesin’ Crossword, “Give It a Go” – Erin’s write-up 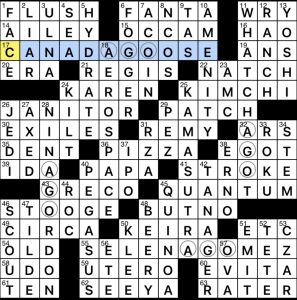 Hello lovelies! This week’s Jonesin’ theme is pretty simple: Names and phrases which contain the word AGO. I enjoyed the elegance of each first word ending in A and the second word beginning with GO, but other than that there isn’t much to this theme.

Let’s stop there. Until next week!

Theme: CVS — Not the drug store chain but the plural of Curriculum Vitae (never mind that the actual plural is Curricula Vitae). The revealer’s clue is [Brief résumés, and an apt description of this puzzle’s four longest answers]. Those answers are all familiar(ish) two-word phrases with initial letters C.V. 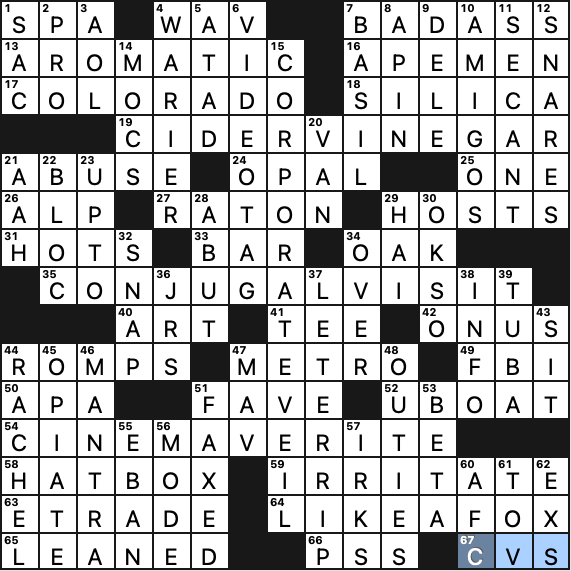 Fairly standard initial-letters theme, but the fact that one of them (the last one) is crossing all of the others is absolutely bonkers. Maybe typical solvers won’t think anything of that, but from a constructor’s standpoint, that’s quite a rarity. Sure, there are other CV phrases (computer virus, e.g.), and these were probably chosen in part because they could be crossed in this way, but still, there aren’t that many CV phrases to begin with, and of course, there still has to be puzzle symmetry with letter lengths and all. So…quite an amazing bit of serendipity on display here.

The fill is mostly nice besides with BADASS, AROMATIC, COLORADO, LIKE A FOX, and “LET ’ER RIP!” as highlights. Not so keen on evolutionarily-suspect APEMEN as well as EBAN clued [Member of Meir’s cabinet]. Seems silly to me that we’re supposed to know a cabinet member from another country’s government from 50 years ago. I couldn’t tell you who was in our government’s cabinet 50 years ago. Also, I’m not exactly sure what is meant by VIDEO TAG [Aid in organizing digital movies]. I can surmise, but I’ve never heard the phrase before and I’m guessing most solvers haven’t either. 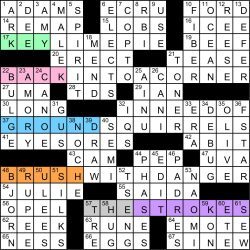 Good day, everyone! I hope you are all doing well to start this final full week of January!

Today’s stroke of genius from Liz comes from the theme answers, in which the first word in each of the first four theme entries is a word that can also come before the word “stroke” and each is a types of stroke, in one sense or another. The final theme entry, THE STROKES, is the reveal and, possibly, the source of an earworm or two if you’re a fan of the band (57A: [“Future Present Past” band … and an alternate puzzle title]).

I totally remember one of my old classrooms in high school having This Side of Paradise on a shelf in the back of the room in the midst of many other books, but never knowing anything about the book and who wrote it…until now, when having to figure out one of the characters, AMORY, in this solve (23D: [“This Side of Paradise” protagonist]). Come to find out now, F. Scott Fitzgerald named his main character, Amory, after a star Princeton football player at the time, Hobart Amory Baker, a.k.a. Hobey Baker…the eponym of the award given annually to college hockey’s most outstanding player! So even when you’re thinking about this story arc about about unfulfilled romances and eventual disillusionment with society around the Prohibition era and a clash between a younger, free-spirited generation of young kids versus the conservative establishment, it still always comes back to sports somehow! You can’t get away from it! :-)

Might give the book a run soon, and definitely will put it in my never-ending list of suggestions that I have in my Notes app.

“Sports will make you smarter” moment of the day: RUNE (63A: [Ancient letter]) – Up until early Monday morning, there was a real good chance that this entry would have more constructors think about putting a sports spin to it, as 19-year-old Danish tennis star Holger Rune was still alive in the Australian Open. Though he ended up losing the match, Rune’s meteoric rise up the rankings portends to future greatness, and he already has had a number of accomplishments under his belt, including being ranked the No. 1 junior player in the world. The current world No. 10 has won three ATP Tour titles already, including winning one of the premier events on tour, the Masters 1000 event in Paris last November. In that event, he became the first ATP Tour player ever to win five consecutive matches against top-10 opponents: Hubert Hurkacz, Andrey Rublev, Carlos Alcaraz, Feliz Auger-Aliassime and, in the final, Novak Djokovic. 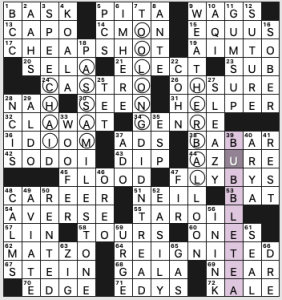 I’d call this a tough theme for a Tuesday if solvers needed to know about ASSAM tea to solve the puzzle, but the circled teas can be post-solve add-ons if you wrangle the clues okay. Fun theme revealer: 39d. [Beverage mixed with tapioca pearls … or a description of this puzzle’s circled letters?], BUBBLE TEA, and the circled letters (circled and not shaded in the nytimes.com version, as I might have expected to see) spell out CHAI, ASSAM, OOLONG, and HERBAL teas, in each case spanning breaks between words. Note that the puzzle is 15×16, a little taller to accommodate a 16-letter themer:

25d. [Vietnamese New Year], TET. Take a moment of silence to remember the victims of Saturday night’s mass killing, which ripped a hole in the Lunar New Year festivities, and their communities in mourning. 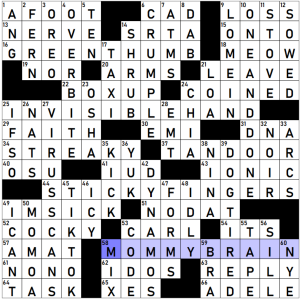 Today’s puzzle is for new parents out there who still have to make things happen no matter how tired they are. Heck, you might even find inspiration for a crossword theme in the midst of your daydreaming! This seems to have been the case for Ms. Nowak, who used her MOMMY BRAIN (see 58A – [Mental disarray of early parenthood that inspired the 16-, 25- and 44-Across clues?] to interpret common phrases with a fun kid-oriented twist. Let’s see what she came up with:

When “mommy brain” appeared I had a real head-scratching moment. How does this phrase relate to the theme answers?? Well, it doesn’t. But, after looking back, it definitely explains the mindset of the constructor when she recontextualized the theme phrases. Aha! That’s it! Nice touch that all phrases relate to the same extremity — thumb, hand, fingers — although I wish the “green thumb” clue would have followed the same formula as the other two. It is the only one that does not include a subject… the clue could have easily been [Result of a baby finger painting with blue and yellow?]. But alas…

There’s some nice clean fill here and the cluing was fun and fresh throughout. The long bonuses really elevated this puzzle: OVERBITE, ONE-AND-DONE, VIRUS SCANS, and DOG TIRED.

Thanks for the fun puzzle, Samantha! 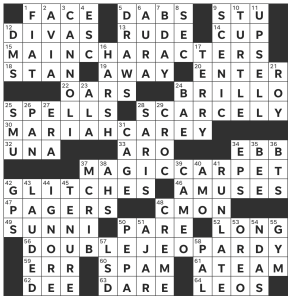 The puzzle’s title is a reference to the Beastie Boys song by the same name – I hadn’t heard it before, but I’m listening to it as I write this recap. I may not have known what the title was in reference to, but as soon as I saw it I knew what the theme would be. That was very helpful for getting the last three theme answers, all of which I was able to drop in with only a letter or two. I didn’t know MARIAH CAREY had the nickname “The Songbird Supreme” – I guess since she can’t be the Queen of Christmas, it’s better than nothing.

I’m not crazy about this theme. It’s a Tuesday-level puzzle and the fill is fine. The theme….well, let’s get into it.

I couldn’t figure out what the theme answers had in common. 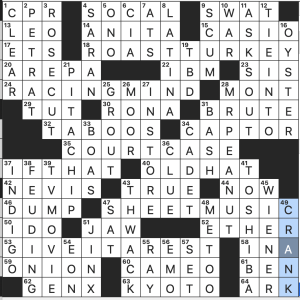 So what’s the through line? 53a tells us. [“Enough already!” or what one may do to each answer to a starred clue] is GIVE IT A REST. Love the first part of this clue. I’m not crazy about the theme part. It applies to the ROAST TURKEY and I suppose to the RACING MIND. A COURT CASE is not “given a rest.” The litigants rest their cases. Not the same thing. And SHEET MUSIC has rests – also not the same thing. This is more of a stretch than I like to see in my themes.

What I didn’t know before I did this puzzle: that KYOTO is considered Japan’s cultural capital. 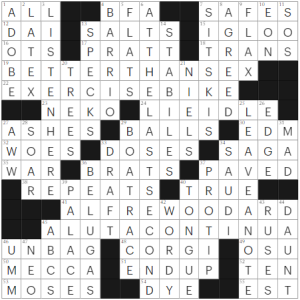 This “moderately challenging” puzzle was definitely calibrated correctly, at least for the solver.

My experience was: getting a few disparate answers, encountering stuff that was either mysterious or outside my wheelhouse, steadily finding more short entries that were gettable or inferable, filling in more and more of the grid so that the longer ones succumbed, and finally stitching the whole thing together. To wit: it worked just like a crossword is supposed to. Funny, that.