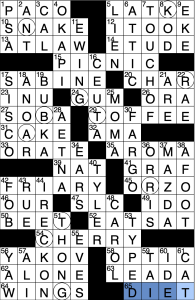 hello and welcome to episode #764 of matt gaffney’s weekly crossword contest, “Eat, Drink, and be Meta”. for this week 3 puzzle, the instructions tell us that This week’s contest answer, which is 11 letters long, is what some meals finish with. all right. what are the theme answers? eleven across answers in this 11×17 grid are clued as food items:

in addition, there are two food-adjacent across clues that are not actually themselves food: {One way to dine al fresco} PICNIC and {Bothers persistently} EATS AT. finally, the last across entry (the omega across, as matt called it in his writeup of last week’s puzzle) is the only overtly thematic answer: {Liquid ___ (you’ll need to go on one for this meta)} DIET.

what does this mean? i’m at a loss so far. i like that there are 11 foods in the acrosses (and 0 in the downs), because that echoes the instructions. just taking their first letters doesn’t produce anything (ten consonants and only one vowel is not a promising ratio); taking their last letters might actually be suggested by “finish with” in the instructions, but that doesn’t give much either (EERMAEEOTYS).

what could the liquid DIET clue be suggesting? in a cryptic clue, “liquid” might suggest anagramming (and not just because any keyword could suggest anagramming); but i couldn’t get anything interesting out of anagramming the 11 last letters (TEAM EYESORE? EYES A REMOTE?). it could be suggesting something like adding water or H2O, either in a semantic sense or a syntactic sense, although i don’t see what that’s doing.

hmm, TOFFEE is only one letter off from COFFEE, which is a liquid. oh, and you can go LATKE to LATTE. maybe we’re word-laddering every food into a drink? yes, i think that’ll work:

the changed letters spell out THIRD COURSE, which is the meta answer.

this is a very nice meta! it took me a while to see it, but in retrospect, replacing foods with drinks is what a liquid DIET entails in a semantic sense. i didn’t know what to make of it, but what actually got me there was thinking about possibilities for the final answer, and i wanted to incorporate the drink part of the puzzle title, so i was thinking about various types of after-dinner drinks. i couldn’t think of an 11-letter term for after-dinner drinks (the postprandial equivalent of “apéritif” would be the less common “digestif”, but that’s too short anyway), but both coffee and sherry popped into my head as candidates, and they were both hiding there in the 11 acrosses i’d already highlighted.

frankly, i’m relieved to have gotten it, even at the eleventh hour, after a poor showing last week on a somewhat straightforward week 2 (at least, if it was not entirely straightforward, the tricky part came after the part that i missed, and i’m pretty sure i would have gotten it if i’d ever made the key aha in the first place).

speaking of meals, it’s almost time for lunch, but i’ve got to shovel some snow first, so i’ll be off. let’s hear from you in the comments!