This is Rebecca’s debut and it’s a good ‘un! The revealer tells us what to look for. 57a [Improvise like Nicki Minaj, or a hint to this puzzle’s theme] is DROP A VERSE. Each theme answer is a common phrase with VERSE removed. 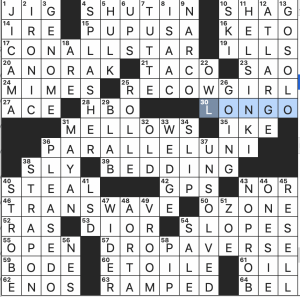 Fun theme! All the base phrases are solid and all the resulting entries are amusingly wacky.

What I didn’t know before I did this puzzle: I’d never heard of Kigurimi, apparently part of Japanese street style – pajamas or ONESIEs. 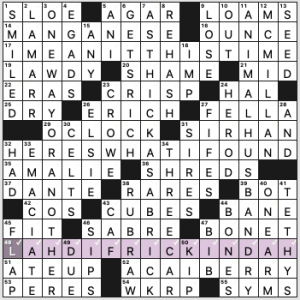 I enjoyed this puzzle so much! That lattice of six intersecting 15s really hit the sweet spot for me. You might think “LAH-DI-FRICKIN’-DAH” is weird or contrived, but if you remember Chris Farley’s “Matt Foley, Motivational Speaker” sketch, it’s golden. There’s also the Siri line “HERE’S WHAT I FOUND,” the Blondie song and lyric “ONE WAY OR ANOTHER,” and AS THICK AS A BRICK.

The long fill pulled my focus off fill like SLOE AGAR LOAMS (a most unpromising top row!)

Theme: The trigram DIG appears in each theme answer (in the Down direction) but at a lower and lower position as we move across the grid.

I present the entries in left-to-right order. 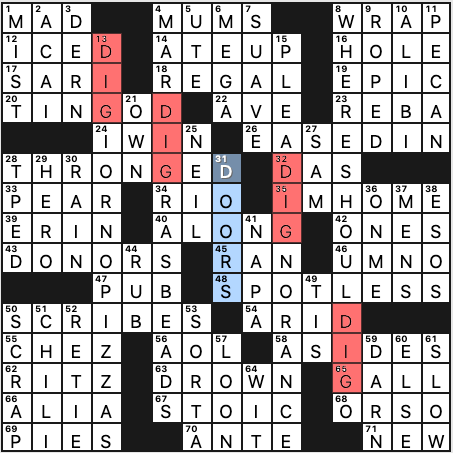 Maybe it’s not fair, but it’s hard for me to encounter one of these “moving” types of themes and not compare to the Guizzo-Chen classic, THE DESCENT OF MAN. In that one, there are five entries and the trigram MAN steps down methodically from left to right, top to bottom. It was masterfully done with all grid-spanners.

Here, yes, each DIG is “deeper” than the previous one, but I wanted some regularity in the positioning. As you can see once I highlighted them, there isn’t the uniformity that I look for. With the middle two entries, the starting D is across from the previous entry’s G. But the final DIG is much lower down.

No, having such regularity isn’t strictly necessary, but it’s an elegant touch. And it certainly depends on the trigram being used and the number and quality of potential entries.

Since the outer theme entries are 14 letters in length, they couldn’t go in the 3rd/13th columns, therefore everything is pushed into the center. The fill doesn’t suffer terribly because of this—and that’s a sign of the constructor’s skill at smoothing out the grid—but it does lessen the potential for sparkly fill. As such, only SPOTLESS and THRONGED hold the marquee spots. I do like TIN GOD and “I’M HOME” on the shorter side.

Though I felt the theme was executed a little unevenly, it’s still a solid grid with smooth fill. 3.5 stars. 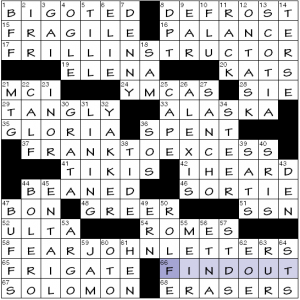 Even after encountering the revealer it took me a few beats to figure out the theme.

Theme: Every themed answer begins with “T” and ends with “ENT,” placing the rest of the letters “in tent.” 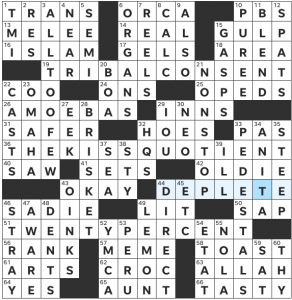 Editor Erik Agard steps into the ring for this puzzle, which I was delighted to see this Friday morning, and this puzzle did not disappoint. I thought the grid had a nice structure, with a nice blend of three-, four-, and five-letter answers in the corners and center sections of the puzzle that flowed nicely as I loved through. As is customary in Erik’s puzzles (and USA Today more broadly), there was a great diversity of clues, pulling from knowledge of TV network logos (10a [“Channel with a three-face logo”] PBS) to economics (46a [“The ____ Collective (group for Black women in economics] SADIE).

As I combed through the answers in preparation to write this, I was surprised to notice that this puzzle doesn’t require the solver to have much pop culture knowledge, out of the reference to THE KISS QUOTIENT, The SADIE Collective, ANITA Baker (more on her below), and MEMEs more generally. It was mostly wordplay with synonyms and fill-ins. That’s not a knock on the puzzle; I personally enjoyed the break. However, it is worth noting.

Now, onto my Friday faves: 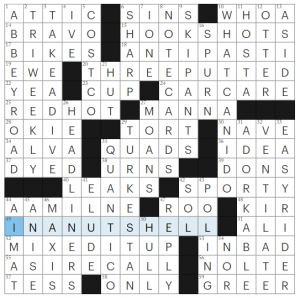 Good morning! Today I write in pure bliss because I am staying with my aunt who has a tomato garden… at any hour of the day (11pm, 9am, whenever), I can just eat the ripest, juiciest most perfect tomato in the entire world plucked straight from the vine. I have never been happier.

Today’s puzzle felt like it had lots of names, although usually that means that it had the same amount of names as normal, but I didn’t know any of them. As a result, this puzzle took me longer than usual. I had not heard of:

I had a phase during Pandemic when I did the Sporcle map quiz everyday, and got all of the countries pretty consistently. To remember all of the -stan countries, I came up with TAKTPUK. (The first letter of all of the -stan countries.) So I knew that TURKESTAN (29D: Historic Asian region traversed by the Silk Road) was a region, not a country. (Though it does have a very similar name to one of the T-stan’s.)

I had JUMP SHOTS before HOOK SHOTS (15A: High-arcing two-pointers that were a signature of Kareem Abdul-Jabar), which slowed me down a decent bit. I liked the clue for TRIWEEKLY (2D: Roughly seventeen times a year… or a hundred and fifty-six times a year), which pokes fun at how we never know if that means thrice a week, or once every three weeks. I liked it enough that I did not linger too long on whether “triweekly” is actually an in-the-language term. I think I was supposed to like ADORKABLE (31D: Charming by virtue of being awkward), but that term feels weirdly…. dated?? to me. I associate it with The Zooey Deschanel Era, which was about a decade ago.

Favorite entry was definitely IN A NUTSHELL (49A: Succinctly summed up), and I don’t think any clues stood out to me enough that I had a favorite.