Theme: The first word of each theme answer is something that can be CAST. 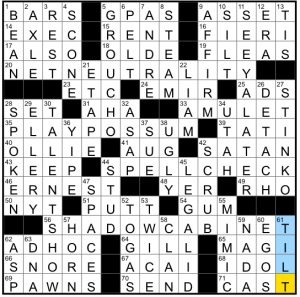 This is a pretty standard theme, but the quality of the answers themselves makes it stand out. While I was solving, I had no idea what the connecting thread of the answers was, but as I found each one I thought “oh, that’s a nice phrase”. NET NEUTRALITY is my favorite (and an important issue to understand), and I didn’t know SHADOW CABINET but was interested to learn more once I got it. (Also, I thought playing possum was playing… dead?… rather than sleeping? So that took me a while to get). Then I got to the revealer, which I got entirely on down crosses since anytime a clue is that long I try as hard as possible not to read it.

Looking back on the puzzle afterwards with the revealer in place, I appreciate how each form of CAST is different – the puzzle would not be as strong if it included both “cast a net” and “cast a line”, say. Oh, and the things that are being CAST are nearly all used in different meanings as well – think of a physical net versus the internet. Between the fun phrases and all these wordplay layers, there was a lot to enjoy during this solve.

The fill, by and large, is fine. Long downs SEE YA LATER and TALENT SHOW are nice, although I don’t love the clue of [“The X Factor” or “The Voice”] for the latter – I feel like reality singing competitions are different than straight talent shows? Let’s just say there’s no one doing magic acts there…. Other highlights for me were references to Eric ANDRE, Guy FIERI, and Bette Davis winning Best Actress TWICE. I also love whenever the Times needs to be meta and clue itself for NYT. Today, they went with [Its motto is “All the News That’s Fit to Print,” in brief].

There were a couple less Monday friendly sections around. I struggled right off the bat with “head” instead of BEAN for 1d[Noggin]. I only know ETAPE from filling my own crosswords, and even still I wrote “etage” first. The only TATI I know is Westbrook, and if the clue for an answer includes the words “dated slang”, I’m never gonna like it (looking at you, STINKO). But overall, a solid Monday puzzle, and one that I had fun solving.

Hope everyone had a lovely weekend!

Theme: Familiar phrases that hide a job title within. The revealer is INSIDE JOBS (58a, [Employee-assisted crimes, and a hint to the circled words]). 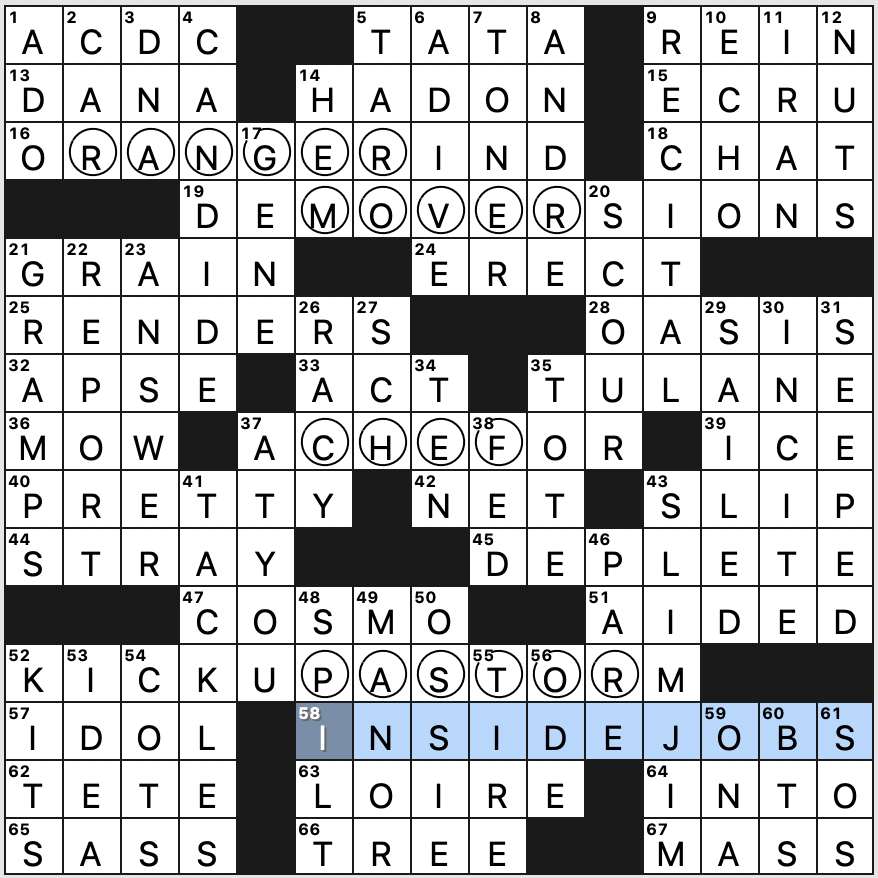 Maybe you liked this better than I did, but only one of these worked for me right off the bat.

As for the fill, it’s mostly workmanlike with no long marquee entries. I do like seeing Voltaire’s CANDIDE, and SLIM JIM makes for a fun entry. Not so keen on weird partials A DIVE and AT YOU.

Clues are about as straight as they come, so that helped speed things along. 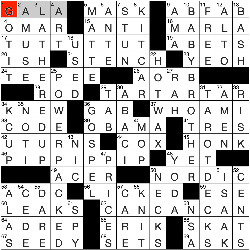 If the last couple of weeks have been an indicator that in the Patti era, “Monday” does not always mean “revealer,” I’m here for it. Here’s a simple but fun theme in which a three-letter syllable is repeated in each theme answer to produce a phrase: 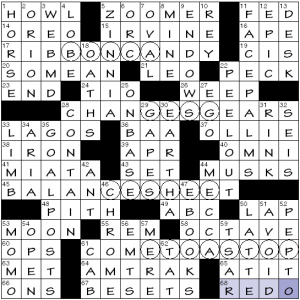 All of those can be combined in a skillet to make a breakfast scramble, and ‘scramble’ of course refers to anagramming. 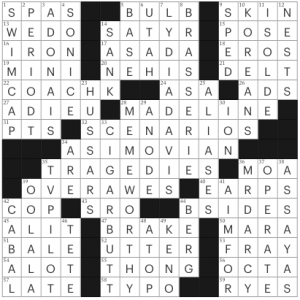 Kind of a collection of seven small crosswords in this 70-worder, with the middle’s quintet of 8- to 9-letter entries linking the other six zones.

Fave fill: COACH K(rzyzewski), MADELINE, “PERIODT” (on the new RuPaul’s Drag Race All Stars: All Winners, judge Carson Kressley used this, “period, with a T on the end”), CIGAR BUTT, MEMEWORTHY, MR. DARCY, filmmaker Olivier ASSAYAS (haven’t seen any of his films but want to).

Did not know: [“Can’t and Won’t” author celebrated for her very short stories], LYDIA DAVIS. Here’s a New Yorker profile of the author. Here’s one of her short pieces of “flash fiction,” a surprising little tale called “Everyone Cried” (is it bad that I was amused?). This is one of those “Oh! I’m glad I learned this” answers.

Good morning folks! The theme in this puzzle did not immediately present itself, because the theme answers are mid-length. (I thought there would maybe be a hidden anagram, like Rebecca’s puzzle from a while back.) But the title and clues eventually made it clear what was going on. Three herbs (TARRAGON, CILANTRO, and PARSLEY) are clued as anagrams of matching entries (ARROGANT, CONTRAIL, and PLAYERS). The six theme answers are arranged symmetrically in a symmetrical grid. I haven’t really seen a theme like this before, which is unusual for a USA Today puzzle where the themes tend to be pretty standard. 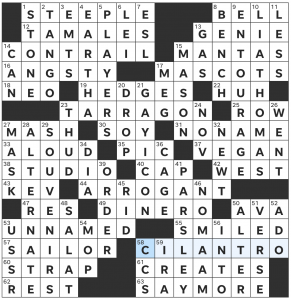 This puzzle really blew me away. USA Today puzzles will compromise on literally everything (word count, number of three-letter words, symmetry, black squares) in order to allow for the cleanest possible fill. But this puzzle made no compromises, and still avoided the random Latin, contrived plurals, and old-fashioned abbreviations that you’ll see in other publications. Such a low word count (74), with stacked long answers in all four corners… and all this with six theme entries!

So much fun stuff throughout, like TAMALES, ANGSTY, MASCOTS, NONAME clued as the rapper, VEGAN, SAY MORE, SOUVENIRS, GAY ICON, ENTOURAGE. I did notice the dupes of NO NAME / NO MA’AM / UNNAMED, but I don’t mind them. 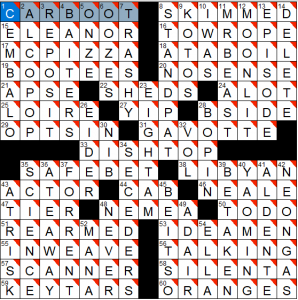 An enjoyable puzzle in an otherwise blah day. YMMV may vary with 6- and 7-letter-heavy themeless grids, because you’re invariably going to have some glue, but I usually like the difficulty some of that brings.

MCPIZZA, CEMBALO, GAVOTTE, and YAO MING were highlights, while I’m not so sure about SILENT A [58a “Logically” sound] — gotta be very careful with pronunciation clues, I think. EIDER is a word I first learned from crossword puzzles that I’ve occasionally seen off the grid.